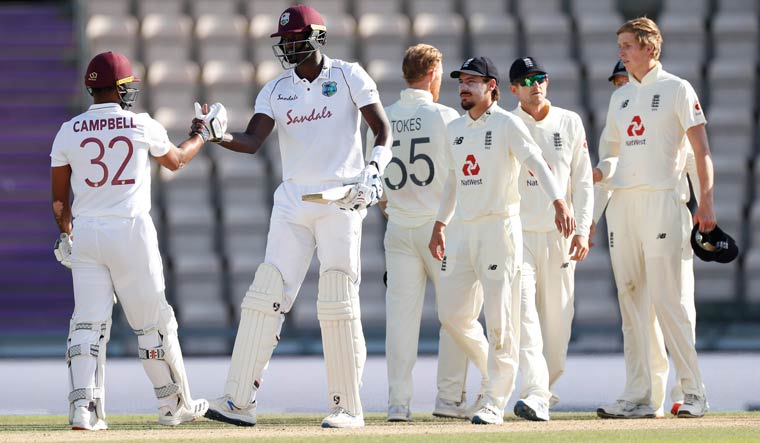 West Indies captain Jason Holder (second left) celebrates with teammate John Campbell, after their win on the fifth day of the first Test match against England, at the Ageas Bowl in Southampton | AP

The West Indies won the first international cricket match since the sport's return after the coronavirus outbreak, beating England late in Day 5 of a thrilling first Test at an empty Rose Bowl on Sunday.

Jermaine Blackwood top-scored with 95 as West Indies overcame an early wobble to win by four wickets in the final session. John Campbell hit the winning run.

West Indies finished on 200/6 in its second innings to take an early lead in the three-test series.

The tourists had resumed after tea on 143/4, still 57 runs from the victory target.

Blackwood and Roston Chase had revived West Indies with a 73-run partnership which ended when Chase was caught behind for 37 against hostile pace from Barbados-born Jofra Archer.

Before the pair came together, West Indies was 27/3.

Blackwood and Shane Dowrich shared a 68-run stand for the fifth wicket before stand-in England captain Ben Stokes had 'keeper Dowrich caught behind for 20.