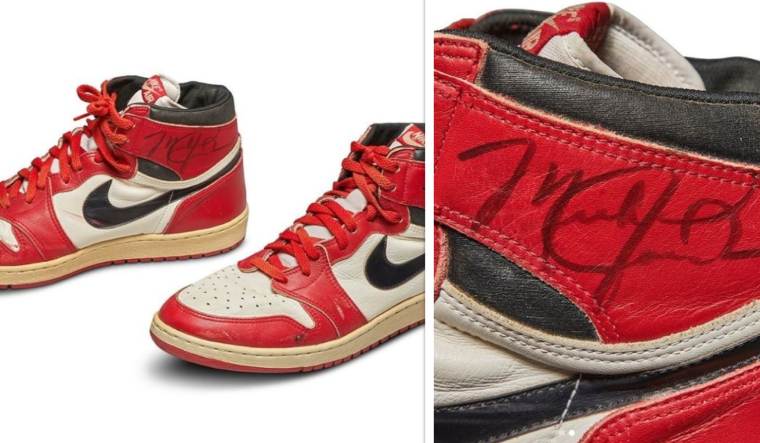 A pair of Nike sneakers worn by basketball legend Michael Jordan has sold for a record USD 560,000 in an online auction by Sotheby’s. The autographed ‘Air Jordan 1s’ were worn by Jordan in his rookie NBA season.

The Air Jordan 1s were designed for the basketball player in 1985.

The bidding for the mismatched pair of sneakers in size 13 and 13.5, as are all of Jordan’s basketball shoes, started last week. The game-worn sneakers, in the Chicago Bulls colours, fetched almost four times the initial estimate. The auction house had expected the pair to go for not more than USD 150,000.

Sotheby’s said that the Air Jordan 1s were part of the collection of Jordan Geller, a collector and founder of the world’s first sneaker museum Shoezeum in Las Vegas.

Last year, Sotheby’s held its first auction dedicated entirely to sneakers, and set a world record for a pair of 1972 Nike running shoes known as “Moon Shoe”. The pair fetched USD 437,500 at the auction.

The auction house, in its Instagram post, said the pair was sold to coincide with the final episode of the ESPN documentary The Last Dance, a 10-part series on Michael Jordan’s career and the Chicago Bulls’ championship in the 1997-98 season.

“Slam Dunk! Michael Jordan’s #GameWorn, #Autographed Nike Air Jordan 1s sold in an online auction today for $560,000, setting a new world auction record for any pair of #sneakers - surpassing the previous auction record of $437,500 set at Sotheby’s in July 2019 by the Nike Waffle Racing Flat ‘Moon Shoe’. One of the most important basketball sneakers of all time made exclusively for the legendary NBA #ChicagoBulls player in 1985, the pair was sold to coincide with the final episode of the popular ESPN documentary ‘The Last Dance’, which spotlights the Chicago Bulls and Michael Jordan...” Sotheby’s captioned the Instagram post.

The auction also coincides with the 35th anniversary of the Air Jordan brand.