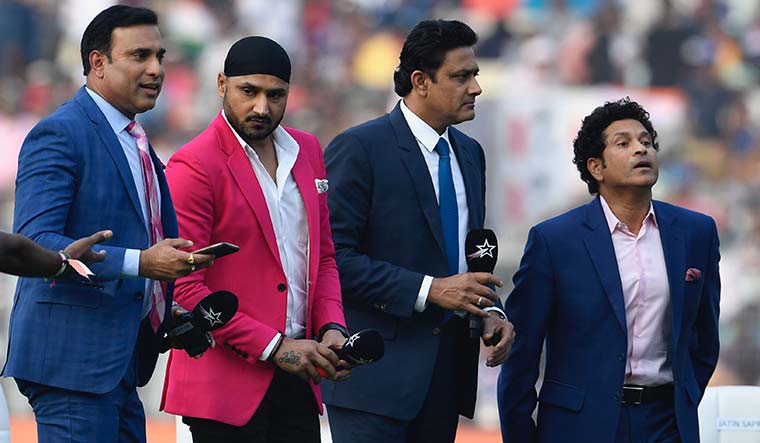 [File] Sachin Tendulkar (extreme right) has made his dislike for the new rules public with support from other cricketers, including Harbhajan Singh (second from left) | Salil Bera

The ever-existing imbalance between the bat and ball, especially in the shorter formats of cricket, has been an ongoing debate more so post the advent of the Twenty20 format. The intense debate around the future of One Day cricket has spurred the International Cricket Council (ICC) to make some rule changes in the format incessantly. The rule which allows bowlers only four fielders outside the 30-yard circle from the 11th to 40th overs as well as two new balls being used in the match have given immense joy to batsmen and fans alike.

However, for the bowlers, the economy rate has just gone out of the window as has the reverse swing. Legend Sachin Tendulkar has once again made his dislike for these two rules public, adding that not just these rules, but the wickets also need to be relooked at for ODIs.

There is without a doubt a general consensus with Tendulkar’s views in the cricket fraternity, especially the bowlers. Seamers and spinners alike feel that the fielding restrictions at present in ODIs and the two new balls have tilted the scales heavily in the batsmen’s favour and that a relook or a tweak is needed while also keeping intact the “attractiveness” of the format for the paying public.

It all started with ICC’s tweet two days ago on Tendulkar and Sourav Ganguly’s record opening partnership of 176 ODI matches, 8,227 runs with  an average of 47.55. “No other pair has crossed even 6,000 runs together in ODI!” it tweeted.

To this, Tendulkar replied, tagging his erstwhile partner Ganguly, “This brings back wonderful memories Dadi. How many more do you think we would have been able to score with the restrictions of 4 fielders outside the ring and two new balls?”

This brings back wonderful memories Dadi.

How many more do you think we would’ve been able to score with the restriction of 4 fielders outside the ring and 2 new balls? 😉@SGanguly99 @ICC https://t.co/vPlYi5V3mo

Ganguly, the former captain and current BCCI president, replied, “Another 4000 or so ..2 new balls..wow .. sounds like a cover drive flying to the boundary in the first over of the game.. for the remaining 50 overs.”

Another teammate of theirs, off-spinner Harbhajan Singh, also responded to Tendulkar. “At least few more thousand runs easily ...such a bad rule this is.....need few bowlers in @ICC to keep the balance right between bat and ball...and games become more competitive when team scores 260/270  nowadays every one scoring 320/30 plus and getting chased as well often,” he tweeted.

In response, Tendulkar tweeted, “Even I feel the rules and surfaces both need to be looked into.” It’s not often that the Master Blaster expresses his views on the game so bluntly or publicly on social media.

Couldn’t agree with you more Bhajji! Even I feel the rules and surfaces both need to be looked into. https://t.co/QZqJ2sB761

Irfan Pathan, former India all-rounder, while “totally agreeing with Sachin Paaji” said, “They would have scored many more runs no doubt. After 20th over the reverse swing earlier come into play making things difficult for the batsmen but for a player of his calibre imagine with two new balls he would have relished taking on the bowlers in his time.”

Pathan rued that ever since these rules came in, the role of the part-time bowler has ended in ODIs. “The value of the main bowler has risen especially those with control over line. Wicket-taking options have reduced, I feel bowlers are not able to bowl as freely as they would like to,” he told THE WEEK.

The former pacer also lamented the vastly reduced role of reverse swing, courtesy the introduction of two new balls . “This rule is decidedly more towards the batsmen, in my opinion. But I see where the ICC is coming from—they want to keep things exciting for the spectators, and more runs and boundaries are what fans like to see. But the quality of cricket should also be there, I know fans are important.”

He feels that surfaces being more probing for batsmen is a double-edged sword if two new balls are used. “If it’s a seaming wicket and the innings gets over at 150 odd runs, it won’t be exciting for fans or for organisers if the match is over too soon. But, no doubt, we need to have better wickets and not the flat decks as is usual. If surfaces are looked into, I feel then we don’t need two new balls. Then the extra bowler, too, comes into play. I would then prefer going with one new ball only throughout the match.”

Perhaps lessons from the ICC 2019 World Cup in England will be heeded as surfaces surprised teams—expecting them to be flat decks, but as it turned out, the going for the batsmen was not easy in many key matches including the unforgettable final match which saw both England and New Zealand tied at 234.

Team India seamer Ishant Sharma, too, concurred that the rules have made life worse for bowlers in present times. “With four fielders outside 30 yards, obviously, there is no competition between bat and ball. Plus the wickets are flat and the white ball does not reverse. What can the bowlers do? They have to accept the rules and play on. The advent of T20 cricket has made the ODI game faster, too. Now the strike rate is more important as the economy rate you cannot control,” he said to THE WEEK.

Speaking on the efficacy of the two new balls rule, the lanky pacer said, “I personally liked the rule where the ball was changed after the 34th over. At least, then the spinners had a bigger role in the match.”

As for Tendulkar’s comment on the nature of wickets in ODIs these days, Sharma agreed saying, “Look at the Test cricket surfaces—with the Test Championship, everyone wants a result in Test cricket, and same should be the case in ODI championships. But I understand that dilemma of the organisers. Spectators want to see lots of runs, hits and thrilling cricket these days. Nobody wants to see teams getting out on low scores. So, a balance is needed, I feel.”

Former India spinner Murali Kartik, who is also a commentator, has been vocal about these issues on air as well. “Ever since two new balls were introduced in one-day games, the balance between bat and ball has furthered worsened. As it is, the white ball hardly used to swing earlier, at least it could reverse. Picking the ball, too, was tough earlier—it would lose colour especially from the 41st over onwards—there was something for the bowlers. Plus, you have one less fielder now. Sachin Paaji is right. Great players will pick gaps due to that easily, he and Ganguly would have thrived. Also, if wickets are a lot more conducive for bowlers, the ball is swinging around in the 35th over, the captain, of course, will look silly keeping a deep point or a long on or long off.”

The general feeling is that if the ICC and boards look at providing better surfaces, then there need not be the need for two new balls. Somewhere along the line, the ICC, has to relook these rules to give bowlers more, rather than less, role to play in an ODI match. Perhaps it can learn from the lessons of the 2019 Cricket World Cup.