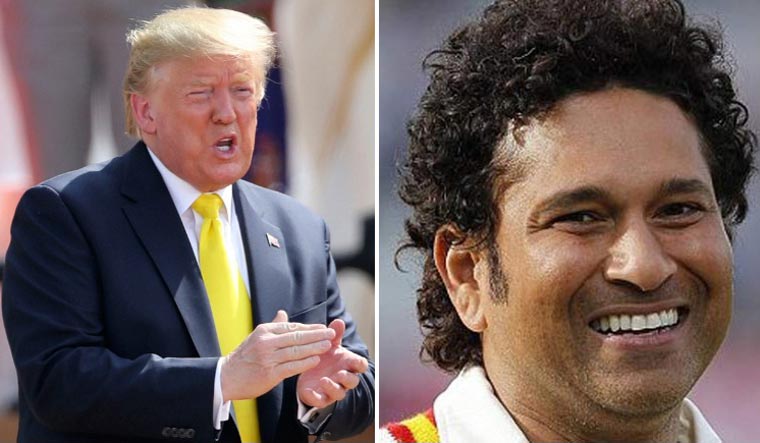 Day one of US President Donald Trump's first visit to India has been nothing short of a spectacle.

Trump was accorded a grand welcome on his arrival in Ahmedabad, with thousands of people lining up along the streets on the way to Sabarmati Ashram first and then to the Sardar Patel Stadium or Motera Stadium. There were tableaux, folk dancers and musicians rolling out the cultural tapestry that is India, at the airport, on the way and at the new stadium where about 1,00,000 people attended the "Namaste Trump" event.

During this extravaganza, there were hilarious moments, too. Like when Trump's signature in the visitor's book at the Ashram was compared to an ECG and more.

But what took the cherry was when the International Cricket Council took to Twitter to troll Trump's pronunciation of Sachin Tendulkar's name. While delivering his speech at the Motera Stadium, he mentioned the master blaster's name along with current Indian skipper Virat Kohli.

"This is the country where your people cheer on the biggest cricketers, from Sachin Tendulkar to Virat Kohli, the greatest in the world," said Trump. But he was not able to pronounce Sachin's name correctly and said "Soo-chin Tendulkar" instead.

ICC were quick to release a hilarious mock video of them changing Sachin Tendulkar's name to “Soo-chin” in their official database, with a caption: “Sach-Such-Satch-Sutch-Sooch-Anyone know?”

Trump is on a two-day visit to India.