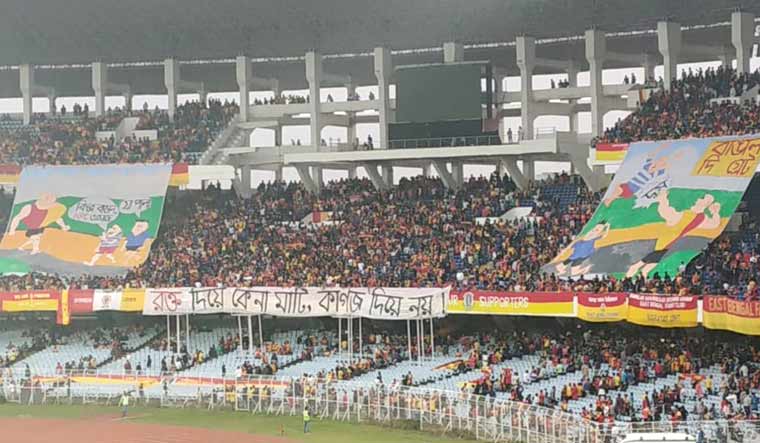 In a unique display, fans of both teams unfurled tifos and banners that openly mocked and challenged the CAA

On January 19, the iconic Salt Lake Stadium in Kolkata witnessed a historic moment. During the much-awaited Kolkata derby in the I-League, fans of arch-rivals East Bengal and Mohun Bagan collectively registered their protest against the controversial Citizenship (Amendment) Act and the National Register of Citizens (NRC), that have already ignited protests across the country.

The rivalry between the two teams is part of Indian football folklore. The clash between the two footballing powerhouses has almost always resulted in high-octane matches in jam-packed stadiums. The Salt Lake Stadium has often witnessed fierce confrontations between fans of both clubs. During the Kolkata derby on December 9, 2012, 40 were injured and a match was called off when Mohan Bagan fans hurled bricks and stones at the referee after he gave marching orders to the team’s star striker Odafa Okolie.

However, when the two rival clubs met yesterday, the reactions from the fans was one of unity and solidarity. In a unique display, fans of both teams unfurled tifos and banners that openly mocked and challenged the contentious new law. West Bengal has seen many demonstrations over the last month against the CAA and NRC.

In a tifo unfurled by the fans of the East Bengal club, it was written in Bengali, “Rokto diye kina mati, kagoz diye noy (we got the land with blood, not with documents)”. A majority of the fans of East Bengal are from the immigrant population from Bangladesh who migrated during the 1947 partition. Many have faced its brunt, as they have been bullied on social media platforms for their Bangladeshi identity.

Another banner showed Bantul the Great, a popular superhero Bengali comic strip character created by Narayan Debnath, to protest against NRC and CAA.

"Pala, pala, pala NRC asche" (run away, the NRC is coming) to which the Bengali superhero comes to the rescue, showing his muscle power.

Another display read: "You Bangal, where are the NRC papers", as Bantul responds with "go away".

Mohan Bagan fans extended their support to the fans of their rival club and publicly opposed the CAA and NRC, as they rolled out banners, in which one reads, “When we were here, there were no documents.”

The face-off between the two sides gave die-hard fans of the two clubs to voice their unanimous dissent against the new law, which has been criticised as trying to set up an unfair immigration and citizenship regime that discriminates on religious lines.

The match was attended by more than 63,000 spectators. Mohun Bagan, who will join Indian Super League from next season as a merged team with ATK, beat East Bengal 2-1.

East Bengal, who played under pressure in the first-half, looked a transformed unit after the break but Mohun Bagan struck through Baba Diawara (65th) against the run of play with the man-of-the-match Beitia sending in a clinical corner kick.

A lacklustre East Bengal reduced the margin through Marcos Jimenez de La Espada (72nd) as there were a slew of attacks from the red-and-gold camp but none of them resulted in a goal.

The next Kolkata derby of the I-League, the last one between the two sides, will played here on March 15.