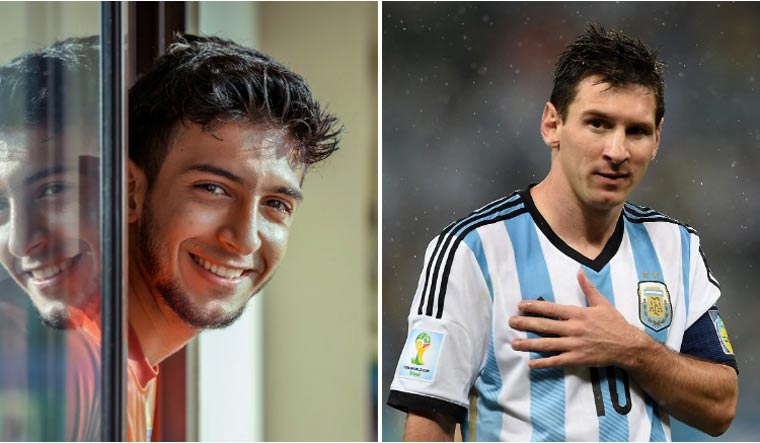 He is just seven matches old, but midfielder Sahal Abdul Samad has already brought some fresh air in the Indian football team with his dribbling, feints and turns.

Not surprisingly, the youngster wants to mould himself like Argentine maestro, Lionel Messi.

The 22-year-old Kerala player made an immediate impact in his debut match against Curacao in the King's Cup in June and within four months, he has become the midfield pivot of the Indian football team.

In the historic goalless draw against Asian champions Qatar in the World Cup qualifiers last week, Sahal showed his prodigious talent against his more fancied opponents, as he and right winger Udanta Singh got a couple of half chances on the counter.

"I love dribbling, gunning for a sprint etc and I love to do that wherever I play. I love to put through balls, penetrate the defence, attack with the ball. I'm a fan of Lionel Messi, I watch him a lot and try to learn as much as possible," Sahal told PTI in an interview.

Sahal is one of the youngsters blooded into the national team by new head coach Igor Stimac. He showed his talent while playing for Indian Super League club Kerala Blasters where he has been for last two years. He did not, however, make it to India's final squad for the Asian Cup in January.

Sahal loves to hold the ball but sometimes loses possession and that is one area he wants to improve.

"At times, I hold the ball which is good and sometimes bad too. Sometimes, I lose possession in a silly way but everyone encourages me to play with the ball which gives me confidence and makes me happy as well," said the player.

Naturally, he is loving Stimac's possession-based football, building from the back with neat passes and smooth transition to attacking.

"In modern football, it's all about keeping the ball and making the opponent run and get them tired. I, personally, and the whole team is liking the brand of football which we are playing," said the current emerging player of the year for both the AIFF and the Indian Super League.

"Supporters also continue to cheer for us. Everyone has been enjoying the brand of football which is a positive sign for us."

The national team is buoyed by the draw against Qatar in Doha and Sahal said India can surprise Oman in their own den and hope for a berth in the next round of the World Cup qualifiers.

"It was a historical moment. I can proudly say that it was one of the best matches of my career. This achievement has brought in much-needed confidence to the entire team," he said.

"After earning this crucial point, we have to make sure of winning the next two games (against Bangladesh and Afghanistan). Then only we will get the fighting spirit to work further and proceed. Now, we know what we are capable of and how much we can improve. Personally, I think we can surprise them (Oman)."

India had lost to Oman 1-2 in Guwahati in the campaign opener in a match Stimac's side could have logged full three points but missed it after letting in two goals in the last eight minutes.

India play Oman in November in Muscat while taking on Qatar at home in March next year.

Against Qatar, Sahal had a go at the opposition goal in the second half when India started to open up a bit and looked to hit on the counter. But his left-footed volley from outside the box off a corner taken by Anirudh Thapa missed the mark narrowly.

"I had a great chance which was unexpected given the flow of the game. I tried my best but unfortunately, I missed it. That's the reality of football where you get a chance and if you can grab it, it will make the difference," said Sahal.

Asked about Stimac's game plan against Qatar, he said, "The coach has taught us to be realistic and know the opponents minutely. He wanted us to focus on our defensive structure without forgetting to attack.