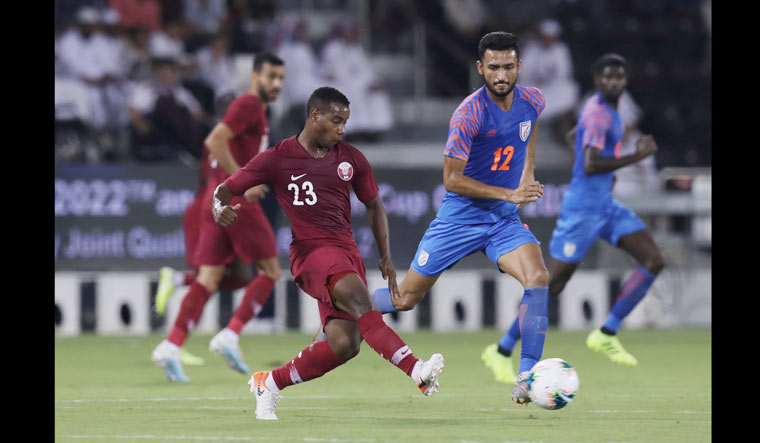 Though home side Qatar were the overwhelming favourites for the qualifying match against India, having won the Asian Confederation Cup this year, the Blue Tigers held the score level in a thriller of a match that saw the away team get their first point in the Group E stage of the 2022 FIFA World Cup Qualifiers.

Coach Igor Stimac told the-aiff.com that India was hoping to learn a lot from the Qatari side and this seems to have been the case after the first half, as India read most of the Qatari offence’s moves thereafter, blocking numerous goal attempts and hanging on against the Asian champions long beyond what was expected.

Though Qatar was on strong display in the first half, they failed to get past the Indian defence, with stand-in skipper and goalkeeper Gurpreet Singh Sandhu blocking numerous shots time and again, to keep the score level.

The last match Qatar played, which was against Afghanistan on Thursday, saw the home side win 6-0. India has only played Qatar once at a World Cup qualifier, back in 1996, and had lost by six goals.

This time was different. The Indian squad—and Indian football by extension—was at its most mature point yet, with players schooled in international clubs and domestic leagues ensuring that the quality of play was international.

The first half saw India play it safe, crowding the defensive zone and managing no real goal attempts on the other side. The first 13 minutes nearly saw a goal by Abdulaziz but this went wide.

After that, Sandhu made sure that every shot that came his way was stopped or deflected. A yellow card in the 24th minute (for deliberating too long before a goal-kick) did not deter the Indian captain, who plays for Bengaluru FC and used to play for Norwegian club Stabæk Fotball (where he became the first Indian to play in and captain a European top division league.

India’s top scorer Sunil Chhetri was missing in this match as he was down with a high fever. Chhetri was replaced by Manvir Singh who performed admirably. His was not the only substitution—Brandon Fernandes, Ashique Kuruniyan and Subhashish Bose were also out of this game, replaced by Nikhil Poojary, Sahal Abdul Samad and Mandar Rao Desai.

In the second half, Sahal tried his level best to score with a fierce spree of counter-attacks that saw him best the Qatari defence briefly, but the Indian attackers were unable to convert the opportunity.

The match's fiercest moment was when Madibo slide tackled Sahal from behind and was given a yellow card, the second of the game after Sandhu’s.

In the 65th minute, India got their first corner kick. Thapa took the shot and sent it towards the far post, where Sahal intercepted it and tried to score but missed.

Gurpreet saved yet another goal attempt in the 75th minute, blocking a powerful attempt by Qatar captain Al-Haydos.

Soon after, Qatar missed a crucial header that was their closest chance yet at scoring.

With just ten minutes to go, India hoped for a miracle, even if that was just a draw. A strong run by Udanta beat Abdelkarim Hassan after a furious struggle, followed by a pass to Rowllin who attempted a shot on goal but missed.

India, who had suffered a heartbreaking 1-2 loss to Oman in their opening match on September 5 in Guwahati, now have one point from two matches while Qatar have four points as they had beaten Afghanistan 6-0 in their first match here.

India's next match will be against Bangladesh on October 15 in Kolkata.