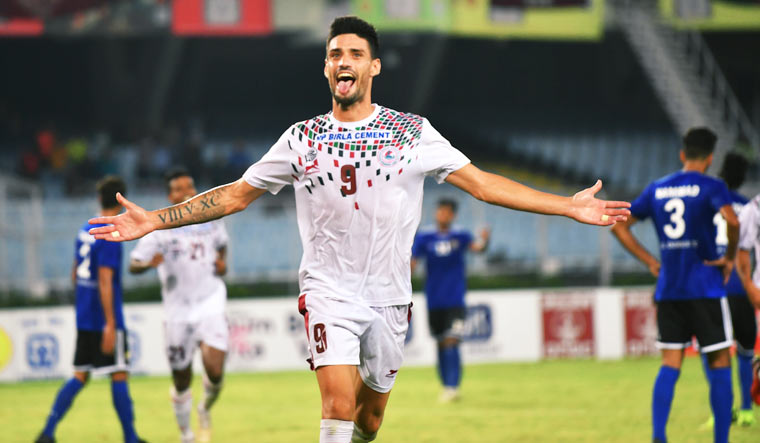 Mohun Bagan's Salva Chamorro celebrates after scoring his team's first goal in the semifinal of the Durand Cup, against Real Kashmir FC in Kolkata | Salil Bera

Super-sub V.P. Suhair struck an extra-time brace as Mohun Bagan saw off a gritty challenge from Real Kashmir 3-1 to set up a summit clash with Gokulam Kerala in the 129th Durand Cup at the Salt Lake Stadium on Wednesday.

Much like the first semifinal in which Gokulam Kerala scripted a stunning turnaround in the second-half stoppage time, Real Kashmir struck the equaliser in the 90+3rd minute to cancel Salva Chamorro's first half goal and force the match into extra-time.

But it turned out to be a tale of two Keralites in the two thrilling semifinals.

First it was Ubaid C.K., who produced two stunning saves in the penalty shoot-out to sound the death knell for his former side East Bengal.

Next it was former Gokulam Kerala forward Suhair who struck a brace in the 93rd and 112nd minutes to seal a final berth in the Asia's oldest tournament for a record 29th time.

Earlier, Salva Chamorro broke the deadlock in the 42nd minute after captain Gurjinder Kumar took a turn towards his right to set it up with his left foot for the Spaniard to shoot in front of the goal.

But Real Kashmir struck the equaliser in the second-half injury time to cancel Chamorro's first half goal and force the match into extra-time.

With a minute left in the stoppage time, Real Kashmir captain Loveday Enyinnaya set up the ball from the midfield and it was their Ivorian forward Gnohore Krizo who slotted it home to stun the Mohun Bagan supporters.

But Mohun Bagan did not take long to restore their lead when Suhair, who had come in place of Romario Jesuraj in the 68th minute, showed fine composure to finish it well.

Full credit should also be given to Fran Gonzalez who bisected the loose Real Kashmir defence with a measured pass to Suhair on the right flank.

In the 10th minute of extra-time, Fran Morante made a superb goalline save from a well-connected Vicky Meitei shot as Mohun Bagan held on to their lead.

Suhair then sealed the issue with his powerful strike after receiving a perfectly-timed pass from Gonzalez.

Mohun Bagan controlled the possession and the Snow Leopards hardly got any chance barring two freekicks.

Mohun Bagan got their first real opportunity in the 14th minute with Joseba Beitia in the attack but the Spaniard's shot from an acute angle was saved by a flying Real Kashmir goalkeeper Phurba Lanchepa.

Beitia got another chance in the 35th minute when he made a nice turn in front of the goal but only to shoot it wide.

In the second-half, Mohun Bagan wasted another golden opportunity when Romario Jesuraj found himself in a one-on-one position with Lachenpa but only to be off target.

Subhas Singh's free kick went over the target in the 24th minute after Chesterpoul Lyngdoh was brought down by a Mohun Bagan defender.

Real Kashmir's star forward Danish Farooq had a lean day, failing to find the target on more than one occasion.