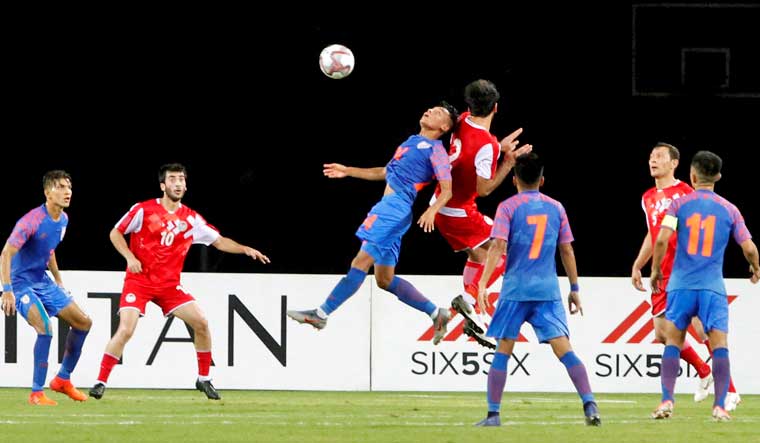 Players of Indian and Tajikistan during the Hero Intercontinental Cup 2019 match in Ahmedabad, on Sunday | PTI

Defending champions India went down 2-4 to Tajikistan in the opening match of Intercontinental Cup in Ahmedabad on Sunday. The game started on a great note for the hosts with Sunil Chhetri scoring two goals in the first half but individual errors costed the Blue Tigers four goals in the second half.

Komrov Tursunov, Sheriddin Boboev, Muhammadjon Rahimov and Samiev Shahrom scored for Tajikistan who fought back from 0-2 down after Chhetri’s double. Soon after the start of the second half, India's defence went off to sleep as Tursunov and Boboev punished the hosts with quick one-two strikes. The visitors scored their four goals between minutes 56 and 75.

Sunil Chhetri put India ahead early on in the fourth minute with a penalty after Tajikistan defender Siyovush Asrorov brought down Lallinzuala Chhangte on a counter inside the 30-yard-box. The captain doubled India’s advantage just before half-time after a defensive lapse from Tajikistan cost them another goal.

Tajikistan fought back and returned with renewed vigour as they started the second half. In between the Tajikistan goals, Chhetri also missed a chance to score a hat-trick.

Ahead of the match, India's newly appointed football team head coach Igor Stimac said that he wants to define the future of the sport in the country. The four-nation tournament also has Syria and North Korea.

India will hope to keep their campaign alive when they face DPR Korea next on July 16 in their second game of the tournament.