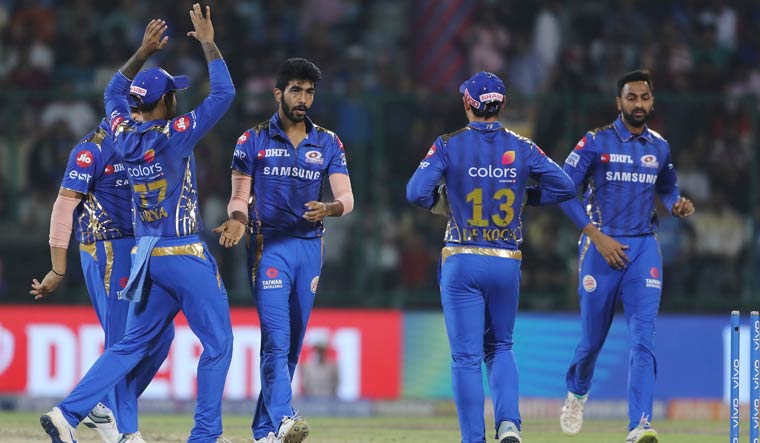 The big-hitting Pandya brothers—Hardik and Krunal—and young leg-spinner Rahul Chahar set up a comprehensive 40-run win for Mumbai Indians over Delhi Daredevils in a return leg of the IPL here on Thursday.

Chasing 169 was going to be tough on a slow and low Feroz Shah Kotla wicket and it turned out to be exactly that as Delhi squandered a solid platform of 48 for no loss in six overs to eventually lose the game by a big margin.

The victory took Mumbai Indians to the second spot on the points table, while Delhi remained in the third spot.

Nineteen-year-old Chahar made the difference for Mumbai in the bowling department by removing the dangerous opening duo of Shikhar Dhawan (35 off 22) and Prithvi Shaw (20 off 24).

His outstanding figures read three for 19 in four overs and he continues his upward graph this season.

The home team could never recover from that double blow and suffered its first loss in the last four games. It was also Delhi's third loss at home out of four matches played here this season.

Mumbai, on the other hand, took another step towards the play-offs with their sixth win in nine games, taking them to 12 points, while Delhi remained on 10 points from nine matches.

Earlier, Hardik and Krunal provided a much needed late onslaught by hammering 51 runs off the last 18 balls to put Mumbai in a strong position.

This was after Delhi spinners Amit Mishra (1/18) and Axar Patel (1/17) tightened the screws on Mumbai with a tidy effort.

Mumbai made a measured start with Rohit's classy cover drive being the only boundary in the first three overs which yielded just 16 runs.

In the following over, a mishit for four off Chris Morris ensured 8000 T20 runs for Rohit (30 off 22), who became the third Indian to do so.

Runs started flowing after that streaky boundary as Quinton de Kock (35 off 27) collected a four and six over deep square leg and by the first powerplay, Mumbai reached a promising 57 for no loss.

It was time to introduce spin and that provided an immediate breakthrough for Delhi as Mishra bowled Rohit with a beauty on his very first ball of the night for his 150th IPL scalp.

Patel was brought in from the other end and he too made instant impact by removing Ben Cutting, leaving Mumbai at 63 for two.

Runs were hard to come by with the two spinners in operation, creating scoreboard pressure which led to the run out of a well-set de Kock following a terrible mix up with Suryakumar Yadav (26).

With Mumbai struggling to 117 for four in 17 overs, a late assault was very much needed to put up a fighting total. And that was provided by the Pandya brothers, with both going after Keemo Paul in the 18th over that leaked 17 runs.

Hardik, who is looking more dangerous with each passing game, whipped Morris for a six before pulling off a helicopter shot off Rabada in the final over.