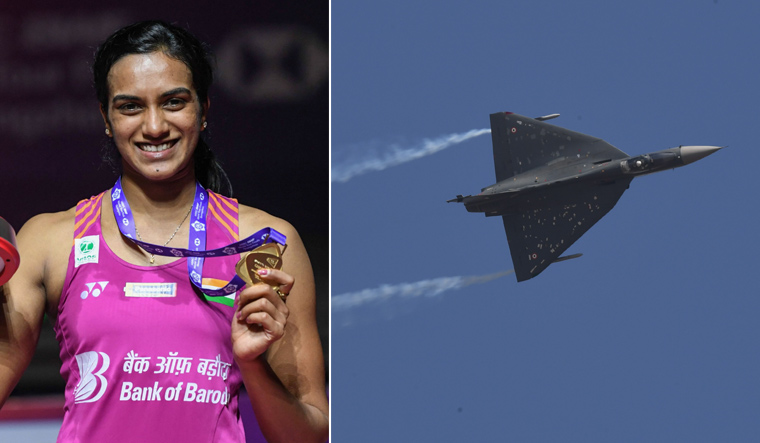 Pusarla Venkata Sindhu, the undisputed ‘Badminton Queen’ of India, might be just flying into aviation history on February 23, Saturday at the 12th edition of Plane Carnival in Bengaluru.

Military sources confirmed to Onmanorama that Sindhu will be co-piloting a Light Combat Aircraft Tejas on the penultimate day of Aero India, which is being observed as Women’s Day.

If the World No 6 badminton sensation makes it to the show, amidst her hectic schedule, she will probably be among the youngest to have taken a sortie on the desi flying machine, which was granted the Final Operational Clearance at the show.

The 23-year-old Hyderabad shuttler will also become the first ever woman to have flown (co-piloted) the desi delight, Tejas. While officially there is no word yet from the organisers on this, it is almost certain that her flight on Tejas is one of the ‘top-listed’ events at the Aero India on Saturday.

If the plans to fly Sindhu go as per the script, then she is sure to be onboard either on PV-5 or PV-6, the trainer versions (tandem seating) of Tejas. Interestingly, Sindhu’s initials are also ‘PV.’

When Onmanorama contacted Sindhu’s family, they said they were thrilled to be part of the prestigious event.

“Yes. We have been invited for the show in Bengaluru. We are waiting for the nal programme,” P.V. Ramana, Sindhu’s father said. Ramana is former Indian volleyball player and an Arjuna Award winner.

For Sindhu, it will be a different experience sitting in the cockpit of Tejas and experiencing the g-force normally being felt by the fighter pilots.

“It’s a great honour for me to fly in a Tejas. It will be a proud moment and I am looking forward,” Sindhu said.

Her first flight ever on a commercial plane was in 2007/2008 period, at the age of 12, when she represented India in the Junior International Championship at Brunei.

She said she always loved flying but never dreamt of getting an opportunity to fly on a military plane.

Sindhu is expected to land in Bengaluru on Friday late night on an Indigo flight from Hyderabad.

Both the Tejas trainers are having a busy schedule at Aero India with many top dignitaries taking sorties on the home-grown military jet.

On February 21, the second day of the show, Indian Army Chief General Bipin Rawat and principal scientific Advisor to Government of India Prof K. Vijaya Raghavan were among the VIPs who co-piloted the Tejas.

IAF chief Air Chief Marshal B.S. Dhanoa had own the Tejas on the inaugural day of Aero India 2017. Fraternity excited Sindhu’s likely date with Tejas on Saturday has the badminton fraternity excited.

Vimal Kumar, former India international and director-cum-co-founder of Prakash Padukone Badminton Academy (PPBA), said it will be a lifetime experience for Sindhu.

“She did mention to me about coming for Aero India and never knew that she will be flying the Tejas. It is going to be a great experience for her. The way our pilots go about doing their business is so challenging. The adrenaline rush and all that will be like playing a tough match for her. I am sure she will be thrilled. We are all excited,” Vimal said.

Interestingly, Vimal and his wife Vinitha Kumar, a scientist, will be at the Aero India on Saturday when Sindhu is expected to take to the skies.

Neeraj Mishra, former national player and team mentor for Avadh Warriors during Premier Badminton League, said it will be one of the rare military-sporting moments in the history.

“We are all Tejas supporters. And, if Sindhu is flying on it, then it has to be a super Saturday,” Neeraj told Onmanorama from Lucknow.

(The writer is an independent aerospace and defence journalist, who blogs at Tarmak007 and tweets @writetake)