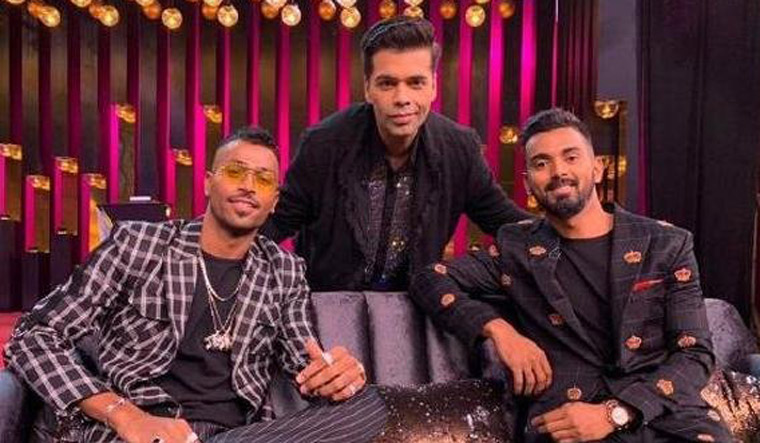 Indian cricketers Hardik Pandya and K.L. Rahul were on Friday suspended pending an inquiry into their outrage-evoking comments on women during a TV show, ruling them out of the ODI series against Australia starting on Saturday.

The cricketers, who have been in the eye of a storm following their sexist remarks on Koffee with Karan, were omitted from the line-up for the opening match in Sydney.

"Both Pandya and Rahul have been suspended pending an inquiry," the Committee of Administrators (CoA) chairman Vinod Rai said.

A source in the BCCI said the two will be issued fresh show-cause notices before a formal enquiry begins.

"Whether it will be an internal committee of the BCCI or an ad hoc ombudsman who will conduct an inquiry, is yet to be ascertained," the official said.

"The Indian team management will take a call on whether they would want to keep the two with the team or send them back. There is a school of thought that they be kept with the team as the backlash back home could be severe but majority in BCCI brass is against the decision," he added.

In case the two are brought back from Australia, the likes of Rishabh Pant and Manish Pandey will be in contention to be their replacements.

"It won't be surprising if two from Vijay Shankar, Shreyas Iyer, Manish Pandey or Rishabh Pant are flown Down Under," the source said.

The decision to hand them suspensions came after Rai's CoA colleague Diana Edulji recommended suspension till further action against the two. This was after the BCCI's legal team refused to declare the duo's comments a violation of the code of conduct.

Edulji had initially suggested a two-match suspension for the duo but referred the matter to the legal cell after Vinod Rai agreed with her and recommended the same.

"It is imperative that players be put under suspension till further course of action is decided for this misconduct as was done in case of [BCCI] CEO [Rahul Johri] when he was sent on leave on sexual harassment matter," read Edulji's response to the legal opinion which is in possession of PTI.

Their remarks on the show were also condemned by India captain Virat Kohli, who called them inappropriate and asserted that the side does not stand by "those individual opinions".

Pandya had boasted about hooking up with multiple women and being open about it with his parents during the interview. Rahul was, however, a shade more restrained in his responses on relationships and women.

It is speculated that the BCCI might bar players from appearing on entertainment shows owing to the ongoing furore.