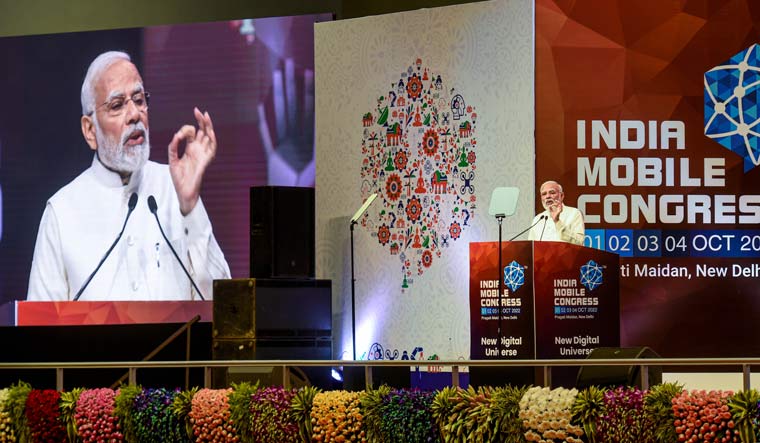 New India will not remain a mere consumer of technology, but will play an active role in the development and implementation of that technology, Prime Minister Narendra Modi said on Saturday as he launched the 5G services in the country.  Modi said with the 5G technology, India is setting a global standard in telecom technology for the first time.

“India will play a big role in designing the future wireless technology, and manufacturing related to it,” he said.

Addressing the gathering at Pragati Maidan in Delhi, the prime minister termed the launch as the beginning of an infinite sky of opportunities. “Today, 130 crore Indians are getting a wonderful gift in the form of 5G from the country and from the telecom industry of the country. 5G is a knock on the doors of a new era in the country,” he said.

The Digital India scheme, Modi said, requires a holistic approach since its goal is to bring technology to common people. "I have seen even the poor of the country always come forward to adopt new technologies... Technology has become democratic in its truest sense," he stated.

“Digital India is not just a name, it is a big vision for the development of the country,” he said, while explaining the four pillars of the vision— price of the device, digital connectivity, cost of data and the idea of 'digital India'.

Focussing further on the scheme, Modi said small traders, small entrepreneurs, local artists and artisans can now market to everyone. “Today you go to a local market or vegetable market and see, even a small street vendor will tell you, not to transact in cash, but via 'UPI',” he claimed.

The prime minister noted that the cost of data in India is among the lowest in the world. “India may not have benefitted from the first three industrial revolutions, but I am confident that India will take full benefit of the 4th industrial revolution and, in fact, will lead it”, he added.

The 5G technology, according to Modi, will not be limited to speedy internet access, but will have the capability to change lives. He urged leaders of the telecom industry association to visit schools and colleges and unleash every aspect of the new technology. He also asked them to create an enabling ecosystem for MSMEs to prepare spare parts for electronic manufacturing.

The fifth generation or 5G services started with India's No.2 operator Bharti Airtel rolling out out services in eight cities, including Delhi, Mumbai, Varanasi and Bengaluru.

Reliance Jio, the country's top operator with most subscribers, is to launch its services in four metros sometime this month, while Vodafone Idea Ltd, the third operator, has so far not indicated any fixed timeline for its 5G rollout.