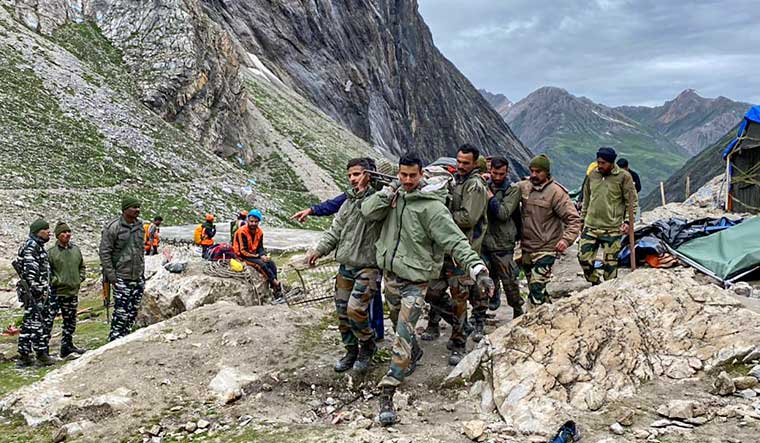 Army personnel during a rescue operation, a day after a flash-flood in Amarnath | PTI

Why was there not enough warning about the Amarnath flash-flood on Friday, which has claimed at least 16 lives, with around 40 missing? Earth scientists say that despite the sophisticated forecasting equipment that is available for forecasters now, there is still a big gap in science. Simply put, the world over, there is still “no science to predict the occurrence of isolated, localised, very heavy rainfall events.''

The rainfall on Friday was so localised that it was only spread a few kilometres around the shrine area. Between 4.30 pm to 6.30 pm, the region received 31 mm of rainfall.

M. Ravichandran, secretary, ministry of earth sciences, said that such events cannot be predicted with the available science. "We need more observations, more data,'' he told media persons today. According to the Indian Meteorological Department, the rains could not be called a cloudburst, because that is a definition for rainfall of more than 100 mm during the course of an hour.

Ravichandran said that across the country, and not just in the Himalayas, rainfall episodes were shifting towards very heavy. Scientists will need to observe these changes, collect more data, to get a better understanding of such phenomena.

Earth science predictions have improved vastly over the decades, and timely dissemination of warning has helped save many lives. This has been observed in recent years, when cyclones battered the Indian coastline, but the loss of life was minimal. There is a sophisticated warning system for tsunamis, which are triggered when there is an earthquake deep in the sea bed. However, with certain earth phenomena, scientists still are rather in the dark. For instance, there is no scientifically proven way to forecast an earthquake. Similarly, thunderstorms cannot be predicted in advance, either.