Post midnight on Friday (IST), NASA will attempt its most challenging mission yet At 3.55pm EST on Thursday (over two hours past midnight in India on Friday), NASA’s Perseverance Mars Lander is expected to touch down on Martian soil, becoming the US agency’s fifth rover on Mars.

The third in a series of Mars missions that took advantage of a launch window in 2020, NASA’s attempt is arguably the most ambitious. Perseverance will land in the Jezero Crate—a basin believed to have been the site where an ancient river deposited its contents onto a delta around 3.5 billion years ago, and a site that NASA has said would be the most challenging it has ever attempted to land on.

Perseverance will enter the top of the Martian atmosphere at a speed of about 19,500 kph as it separates from the rest of the spacecraft. Carrying the NASA Ingenuity Mars Helicopter attached to its belly, it will land deploy its parachute at supersonic speed using a precise Range ‘Trigger’ technology, that determines the precise moment needed to pull the parachute’s trigger so as to reduce the expected landing area.

Don’t be fooled: It may seem easy, but there’s nothing routine about landing on Mars. It all comes down to the final seven minutes…

While descending, the bottom of the spaceraft is expected to heat up to temperatures as high as 1,300 C, aided by a heat shield that will detach 20 seconds after the parachute deploys. Then, a radar will determine how far the craft is from the ground and employ the “Terrain Relative Navigation” technology to find a safe landing site.

If it sounds like a there is a lot of technology deciding when and where the rover lands, it is because a message from Mars to Earth takes about 11 minutes. Thus, the moniker “seven minutes of terror” for the time the spacecraft will take to slow its descent to the Martian surface.

The $2.4 billion mission, after a seven month journey, will hinge on these seven minutes of terror.

"Success is never assured," Chen told a recent news briefing, Reuters reported. "And that's especially true when we're trying to land the biggest, heaviest and most complicated rover we've ever built to the most dangerous site we've ever attempted to land at."

The final phase will utilise a jet-powered sky crane that will lower Perseverance on nylon tethers to the surface. This entire operation will be conducted autonomously, paving the way for a new era in space exploration.

Once on Mars, Perseverance will make history once it deploys the small drone helicopter w, named Ingenuity, which will make the first surface-to-surface powered flight on another world for the first time. Besides the helicopter, Perseverance will also deploy a small SUV-sized which will drill samples from Martian rock and seal them into cigar-sized tubes that will alter be collected to be brought back to earth—the first specimens to be collected by humankind from the surface of another planet. 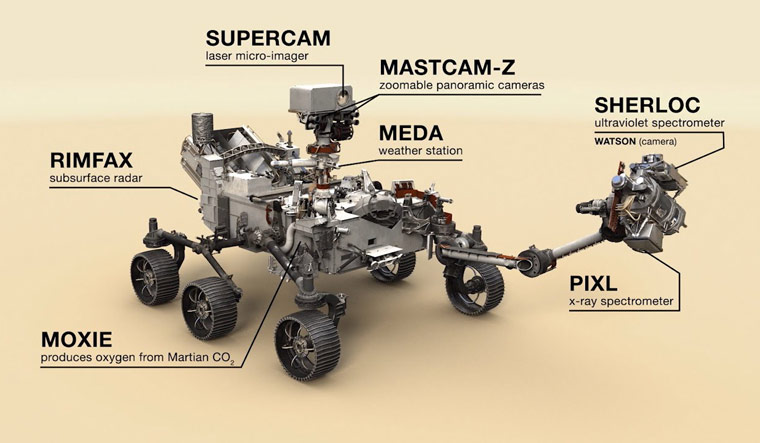