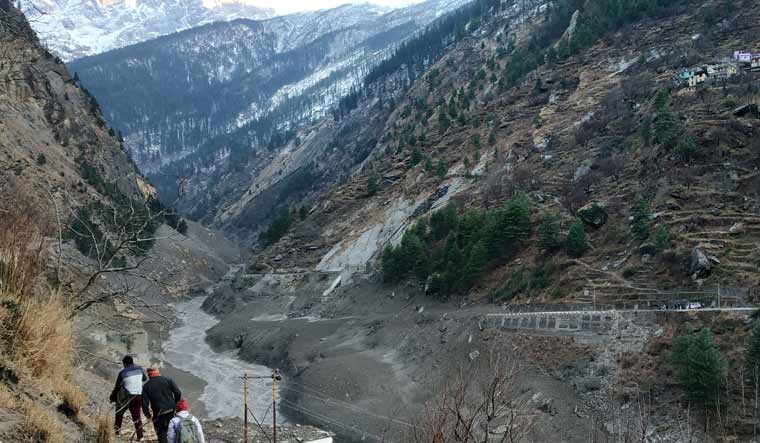 People walk past a destroyed dam after a Himalayan glacier broke and crashed into the dam at Raini Chak Lata village in Chamoli district, northern state of Uttarakhand, India, February 7, 2021 | REUTERS/Stringer

While scientists are still to figure out what caused the flash flood in Chamoki in Uttarakhand that swept off two hydro-power plants and claimed several lives, what is clear is that there was a large quantity of water somewhere up in the glaciers. A chunk of broken glacier alone cannot account for the huge quantity of water that came down the Dhauliganga river.

"A broken piece of glacier cannot melt so quickly, and certainly not in February, while the snowing is still on," said A.K. Dimri, professor at Jawaharlal Nehru University's School of Environmental Sciences. Dimri, who is also member of the Himalayan Monitoring and Assessment Programme (HIMAP), said that there had to be melted freshwater somewhere up in the glaciers. "Either it was a surface lake which hasn't been revealed in initial surveys and may show up in satellite images with greater resolution, or it could be a sub-surface lake," he said. Such water bodies may not even show up in satellite imagery.

What caused that water to come down, has to be explored. Could it be that the icy walls of the lake, already weakened, gave way under the fresh snowfall? Or was the lake breached by an avalanche up in the mountains?

Another theory could be that the lake was formed only recently. Say, in the past few days, because of the damming of the river, courtesy an avalanche or a landslide? Any way you look at it, there was fresh water up there, vast amounts of which when rushing down the river, caused the flash flood.