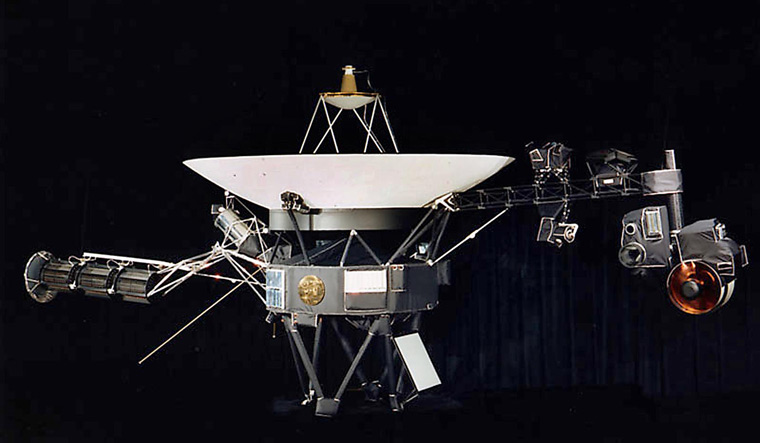 One of the twin Voyager spacecraft | Handout by NASA

More than four decades after beginning its epic journey, NASA's Voyager 2 spacecraft has crossed the elusive boundary that marks the edge of the Sun's realm and the start of interstellar space, scientists have announced.

According to the researchers at the University of Iowa in the US, Voyager 2 has entered the interstellar medium (ISM), the region of space outside the bubble-shaped boundary produced by wind streaming outward from the Sun.

This makes Voyager 2 the second human-made object to journey out of the Sun's influence, following the US space agency's Voyager 1's solar exit in 2012.

The study, published in the journal Nature Astronomy, confirmed Voyager 2's passage on November 5, 2018, into the ISM by noting a definitive jump in plasma density detected by a plasma wave instrument on the spacecraft.

The marked increase in plasma density is evidence of Voyager 2 journeying from the hot, lower-density plasma characteristic of the solar wind to the cool, higher-density plasma of interstellar space, the researchers said.

It is also similar to the plasma density jump experienced by Voyager 1 when it crossed into interstellar space, they said.

"In a historical sense, the old idea that the solar wind will just be gradually whittled away as you go further into interstellar space is simply not true," said Professor Don Gurnett from the University of Iowa, and corresponding author on the study.

"We show with Voyager 2 -- and previously with Voyager 1 -- that there's a distinct boundary out there. It's just astonishing how fluids, including plasmas, form boundaries," Gurnett said.

The spacecraft were launched within weeks of each other by NASA in 1977, with different mission goals and trajectories through space. Yet they crossed into the ISM at basically the same distances from the Sun.

That gives valuable clues to the structure of the heliosphere -- the bubble, shaped much like a wind sock, created by the Sun's wind as it extends to the boundary of the solar system, the researchers said.

"It implies that the heliosphere is symmetric, at least at the two points where the Voyager spacecraft crossed," said Bill Kurth, University of Iowa research scientist and a co-author on the study.

"That says that these two points on the surface are almost at the same distance," Kurth said.

"There's almost a spherical front to this. It's like a blunt bullet," Gurnett added.

Data from the instrument on Voyager 2 also gives additional clues to the thickness of the heliosheath, the outer region of the heliosphere and the point where the solar wind piles up against the approaching wind in interstellar space, which Gurnett likens to the effect of a snowplow on a city street.