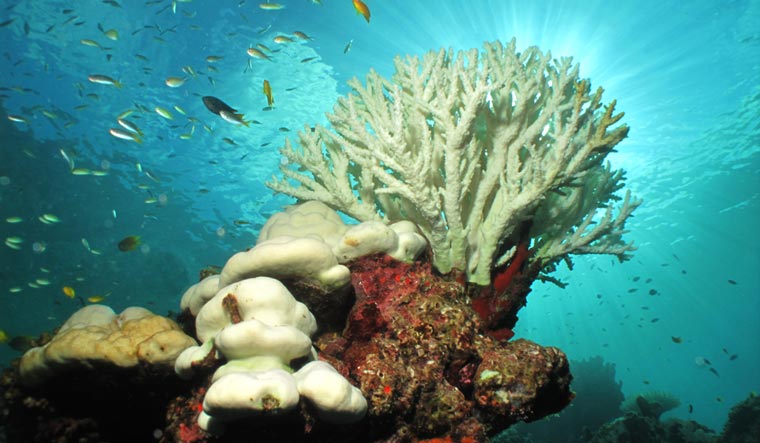 Repeat coral bleaching caused due to rising sea temperatures has resulted in lasting changes to fish communities, according to a long-term study.

In the Seychelles, large predator fish such as snappers and very small fish such as damselfish dramatically reduced in number and were largely replaced by seaweed-loving fish like rabbitfish, said researchers from Lancaster University in the UK.

The study, published in the journal Global Change Biology, shows clear evidence that coral bleaching back in 1998 has led to changes in biodiversity and permanent shifts in the range of fish species coexisting on coral reefs, which still remain in place today.

While some of the coral reefs surveyed bounced back and recovered following the bleaching event, other reefs shifted to fields of seaweeds.

Changes in fish communities were most apparent on these seaweed dominated reefs, but the 'herbivore' fish that feed on seaweeds became a dominant part of the community on all the reefs in the study.

Researchers believe these same changes are likely to be found in similarly damaged reefs around the world and could be described as the 'new normal' state for post bleached reefs.

The study tracked reef recovery in the Seychelles for 16 years, before another major coral-bleaching event impacted the reefs in 2016.

Despite the length of time between these two major coral bleaching events, fish populations failed to recover to their pre-bleaching condition.

Previously there were greater numbers of large predator fish such as snappers and groupers and also a large amount of very small fish such as damselfish and butterflyfish.

After bleaching a new community, dominated by algal-feeding parrotfish and rabbitfish and invertebrate-feeding fish such as emperors and wrasses has taken over.

These changes occurred because the fish's habitat structure—corals—collapsed, researchers said.

Where corals did not recover and seaweeds took over the space, the number and composition of fish changed substantially, they said.

Even on the reefs where the corals gradually recovered between the bleaching events, the number of fish species recovered, but did not return to their original species composition.—

Other studies have shown that the time between bleaching periods is now reducing, and is typically less than 10 years.

In this study the time frame from the 1998 coral bleaching event to the next major one was longer—18 years—yet the fish communities were still unable to recover.

This led researchers to conclude other reefs will suffer similar shifts, especially given bleaching events are becoming more frequent.

"Although the 18-year period between major mass bleaching events allowed corals to recover on some reefs, we found evidence that fish populations were not able to return to their pre-bleaching levels," said James Robinson, of Lancaster University.

"They were substantially altered on the reefs that become dominated by seaweeds," Robinson, the lead author of the study.

The study suggests under current levels of ocean warming—where the average frequency of bleaching events is less than 10 years—permanent changes to reef fishes are likely on most coral reefs globally.

"The new normal for coral reefs will be reef fish communities which have fewer species and are dominated by herbivores and invertebrate feeding fish," said Professor Nick Graham, of Lancaster University.

"This will alter the way coral reefs function, and the fishery opportunities for coastal communities adjacent to coral reefs," Graham said.