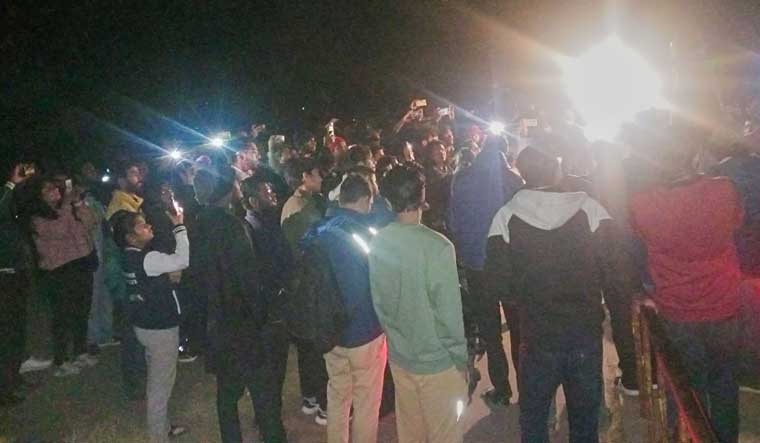 Students stand outside the JNUSU Office alleging that the JNU administration has cut off electricity supply to prevent the screening of BBC documentary India: The Modi Question, in New Delhi | PTI

The row over the controversial BBC documentary screening at Jawaharlal Nehru University (JNU) in Delhi erupted on Tuesday night after stones were allegedly pelted over students watching the screening.

The students had to watch the documentary on the 2002 Gujarat riots and Prime Minister Narendra Modi on their mobile phones and laptops after the proposed screening had to be called off. The screening was disrupted after the varsity's administration reportedly cut off power and internet connections to the union office.

According to JNU Students Union president Aishe Ghosh, ABVP members pelted stones during the screening. "ABVP pelted stones, but no step by the administration yet. We almost completed the film’s screening. Our priority is that electricity should be restored. We will file FIR," Ghosh told ANI.

The pro-left students union said they detained two students who allegedly threw the stones, and both were ABVP members. Asrar Ahmed, who had gone for the screening told PTI, "We were watching the documentary peacefully (on our phones) but some people threw stones at us."

However, the ABVP denied the allegations. "We did not go the spot and no one from us (the students' body) was there. They are just taking our names to get more coverage," ABVP Delhi media convenor Ambuj told PTI.

The student union members then protested against the incident. Raising slogans of "Inqlaab Zinadabad" against the Jawaharlal Nehru University (JNU) administration, the protesting students marched to the Vasant Kunj police station to lodge a complaint against the "stone pelters".

However, the protest was called off after the police promised action. "We filed a complaint, and the police assured us they’ll be immediately looking into the incident. We gave the name and details of all the persons involved. As of now, we’re calling off the protest. We will also file a complaint at the JNU Proctor office," Ghosh added.

The JNU Students Union had planned the screening of the documentary on Tuesday night. However, the varsity administration issued an advisory against the screening, stating it would disrupt peace and harmony. The advisory added that the union had not taken its permission for the event and it should be cancelled. It also warned of strict disciplinary action.

However, the student union went ahead with the plan, but the varsity officials disconnected the power and internet connections minutes before the screening of the documentary.

Following this, the students began to share QR codes and play the documentary on laptops outside the students union office. That's when the stone pelting incident happened.

The union had earlier protested against the move to cut the electricity. "We believe that this country stands for democracy and every form of dissent is celebrated here. By taking this stance and disconnecting power supply, they chose to break our spirits and are trying to finish dissent. If you think that you’ll end JNU’s idea of dissent then that’s not what’s going to happen,” Ghosh was quoted by The Times of India.

There was no immediate official response from the JNU administration to the allegations and claims of the students.