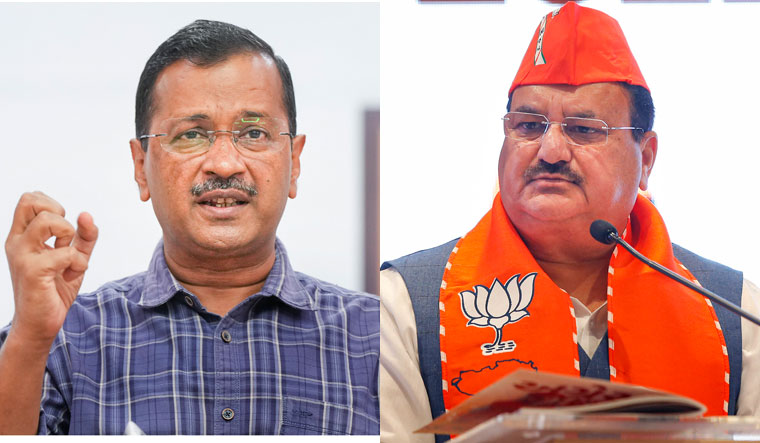 In the backdrop of the latest video release, revealing the 'housekeeping' services provided in jailed AAP minister Satyendra Jain's cell, Delhi CM and AAP supremo Arvind Kejriwal on Sunday lashed out at BJP saying they are a 'video-making company'.

In his latest tweet, Kejriwal said that the BJP's new guarantee to the people of Delhi - will open video shop in every ward. "BJP is a video-making company. In this election, the citizens will give them the task of making videos and those who build schools and hospitals will be given the task of running the government," he tweeted.

Meanwhile, BJP national president J.P. Nadda was quoted by ANI saying "The AAP claims to be honest but today Satyendar Jain is in jail for corruption." Nadda made the statement while he was campaigning for the upcoming polls in Delhi's Wazirpur Industrial area.

Nadda also said that they are confident that people are ready to vote as they are fed up with Aam Aadmi Party's (AAP) work.

"They've opened a massage centre in Tihar Jail, and made a rapist into a therapist," said Nadda during a public meeting in Wazirpur.

The people of Delhi are eager to vote for the BJP in the upcoming MCD elections to resolve various civic issues. The public is fed up with AAP's works and is appreciating BJP," Nadda was quoted by ANI.

"People are with BJP, and it will come back in MCD with a greater margin. The party that said it'll uproot corruption has instead strengthened the roots of corruption in Delhi. Everyday video of their minister is coming from the jail," Uttarakhand CM PS Dhami on Delhi MCD polls was quoted by ANI.