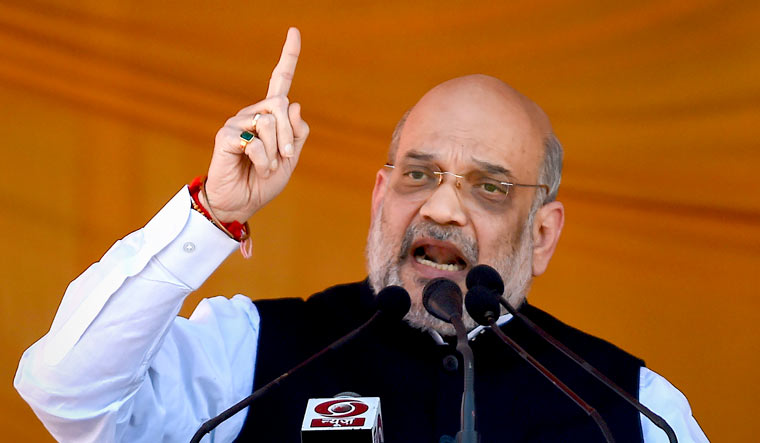 The BJP is committed to bring Uniform Civil Code (UCC) after all democratic debates and discussions are concluded, Union Home Minister Amit Shah said on Thursday.

When asked about UCC, Shah said it is the BJP's promise to the people of this country, right from the Jan Sangh days.

"Not only BJP, the Constituent Assembly had also advised the Parliament and states to bring UCC at an opportune time, because for any secular country, laws should not be on the basis of religion. If nation and state are secular, how can laws be based on religion? For every believer, there should be one law passed by the Parliament or the state Assemblies," Shah said at the Times Now Summit.

“This commitment of the Constituent Assembly was forgotten over a period of time,” he claimed.

“Except the BJP, no other party is in favour of the Uniform Civil Code. In a democracy, healthy debate is a necessity. There is a need for an open and healthy debate on the issue," he said.

The Home Ministry said in three BJP-ruled states, Himachal Pradesh, Uttarakhand and Gujarat, a panel under the chairmanship of retired Supreme Court and High Court chief justices has been formed, where people of different faiths are putting forth their views.

"We will take action on the basis of recommendations coming after this exercise. The BJP is committed to bring UCC once all democratic discussions are over," he said.

When asked if the abrogation of Article 370 from Jammu and Kashmir was his biggest success story, the Home Minister said no success is his individual success as he was a minister in Prime Minister Narendra Modi's Cabinet and every success is that of the government.

“A new democratic generation is coming up in Jammu and Kashmir were over 30,000 panches and sarpanches are percolating the democracy to grassroots,” he said.

The Home Minister also said Rs 56,000 crore of investment had flown and 80 lakh tourists, highest since independence, visited Jammu and Kashmir since 2019.

Lowest incidents of terrorism since it began in the 1990s and zero stone pelting have been reported, which is one of the biggest achievements of this government and there are no two views about it, he said.

"The roots of terrorism in Jammu and Kashmir have grown deep, but the government is committed to eradicate it completely," he added.

Earlier, in his inaugural speech during the summit, the Home Minster said it was time that India's democratic values were let known to the world.

He said the country was moving at a fast pace towards achieving the target of $5 trillion economy by 2025. "In 2014, the country had four unicorn start-ups and the number has now spiralled to over 100," Shah highlighted.

When asked about allegations of agencies like the Central Bureau of Investigation and Enforcement Directorate being misused ahead of elections, the Home Minister said anyone having grievances can move courts and such actions should not be seen through a political prism.

On the question of the purported video of jailed AAP minister Satyendar Jain in which he is seen receiving special treatment, Shah said it should be a question for the Arvind Kejriwal-led party to check whether the video was genuine or not.

"If the video is genuine, the accountability lies on his party and you are asking questions from me. I had also gone to jail and resigned as minister. Such shamelessness to cling to the post of a minister even after being lodged in jail is unprecedented", he said.

When asked about provisions allowing the Centre to remove a minister in such a scenario, he said even the Constitution makers had perhaps not seen such things coming, and hence, there was no such provision.

On the Shraddha Walkar case, the minister said Delhi Police and prosecution will ensure whosoever killed the 27-year-old woman will get the strictest punishment in minimal possible time.

When asked about the upcoming assembly elections in Gujarat, Shah the said contest is between the BJP and the Congress. "We will beat all records in terms of seat and vote percentage in Gujarat," he said.