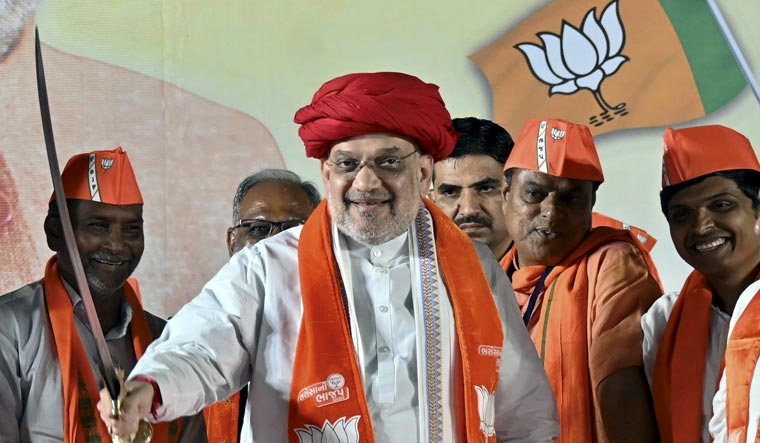 He was addressing a poll rally in Jasdan town in Rajkot district in support of Bharatiya Janata Party (BJP) candidate Kunvarji Bavalia for the next month's Gujarat Assembly elections.

Voting on Jasdan and 88 other seats will be held on December 1 in the first phase of the two-phase polls.

"Medha Patkar, who had stalled the Narmada dam project through litigation, is now walking with Congress' prince Rahul Gandhi. The party owes an answer to the people. This is akin to sprinkling salt on the wounds of the people of Gujarat," the Gandhinagar MP said.

The official handle of Bharat Jodo' had tweeted a photo of Patkar with Gandhi when the Yatra was in Maharashtra, along with a caption, When you do something for the society, people involved in social welfare themselves join you Social activist Medha Patkar participated in Bharat Jodo Yatra.

"Rahul Gandhi chose to take along a person who had deprived Gujarat of getting the Narmada water for 20 years. This is the biggest insult meted out to Gujarat by the Opposition party," said Shah.

He also slammed Delhi chief minister and Aam Aadmi Party leader Arvind Kejriwal for giving a ticket to Patkar in the 2014 Lok Sabha elections from the North East Mumbai constituency.

"But, he (Kejriwal) is smart. He understands this is not the right time to bring her to Gujarat ahead of the elections. But, ask AAP leaders the reason for giving her the ticket," Shah told the rally.

He credited the BJP government for ending water scarcity in the Rajkot region of Gujarat and accused Congress of delaying the Sardar Sarovar dam project.

"The foundation stone of Sardar Sarovar dam was laid by India's first Prime Minister Jawaharlal Nehru in 1963, one year before my birth. The water finally reached here when I turned 58. So who stalled the Narmada project? The Congress party had stalled this project from 1963 till 2002," he alleged.

Shah said Prime Minister Narendra Modi had sat on an indefinite hunger strike when he was chief minister of Gujarat against the Congress-led UPA government's decision to not increase the height of the dam.