Stalin says TN’s education programmes are the best, followed by many other states 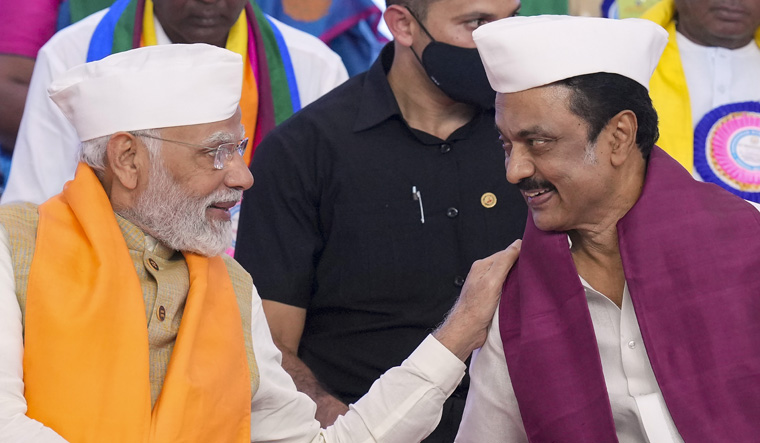 With Prime Minister Narendra Modi on stage, Tamil Nadu Chief Minister M.K. Stalin on Friday made a staunch request to bring back education to the state list from the concurrent list of the Constitution to enable the state governments to take forward the ways of imparting education among people.

“Education is the only asset that can never be snatched away from anyone. It is the duty of the state government to impart the wealth of education among people. So I request the prime minister and the union government to support and encourage the efforts of the state governments by bringing back education to the state list,” Stalin said while delivering a special address at the convocation ceremony of the GandhiGram Rural (deemed) university, in Dindigul.

With Prime Minister Modi on the dias, Stalin said that Tamil Nadu was the best state in implementing various education programmes in higher education and has 22 best universities run by the state government. He said that the DMK government, after coming to power in May 2021, had introduced several new education schemes for the students to encourage them and get into higher education.

Mentioning the Rs 1,000 per month given to the students who get into higher education and the 7.5 per cent reservation to the government school students to get into medical colleges, he told that education was originally placed under the state list when the Constitution was framed but moved into the concurrent list when emergency was in place. “I request the prime minister and the union government to move back education into the state list,” Stalin said.

Earlier, Tamil Nadu School Education Minister Anbil Mahesh Poyyamozhi, while meeting the press before leaving for the Sharjah international book fair being held in UAE, along with 68 students from government schools, said that the New Education Policy will not be implemented in Tamil Nadu. He said the state will soon frame its own policy.