Unemployed youth continue agitation in MP, to hold foot march from Indore to Bhopal from Oct 2 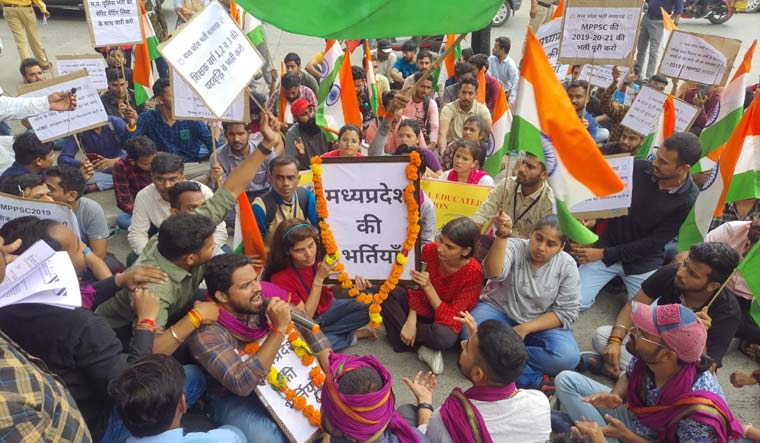 Unemployed youth in the state have launched an agitation since September 21 to demand early completion of recruitment processes for various government jobs, opening more vacancies, reducing retirement age to 58 years and formulation of a law on employment.

They are demanding that the state government take steps for early resolution of the cases related to OBC quota in MP High Court, so that the legal impediments to recruitment could be removed. They are also demanding Rs 5,000 unemployment allowance per month and stopping of recruitment on contract and through outsourcing.

Under the aegis of National Educated Youth Union (NEYU), the youth launched a ‘bharti (recruitment) satyagraha’ in Indore on September 21, held a massive rally for their demands on September 25, launched relay hunger strike the next day and on October 2, they would start a foot march to capital Bhopal (from Indore) to push their demands.

The organization has said that unemployment is at its peak and though the governments make a lot of announcements, no concrete steps are taken for resolving the issue. There are lakhs of posts vacant in various government departments, leading to unusually heavy workloads on the existing employees that make a negative impact on their efficiency and on the other hand educated youth fail to get employment opportunities.

Manraaj Singh, a state services aspirant and member of NEYU, told THE WEEK that about 15,000 youth are expected to participate in a demonstration and gherao of the CM House at the culmination of the foot march on October 9 or 10 in Bhopal.

The youth are also demanding that recruitment process to 1 lakh posts of sub-inspectors, patwaris, constables, and posts in agriculture department, to be conducted by MPPEB should be completed at the earliest.

Singh said that despite their agitation for 12 days there has been no communication from the government side. One of their demands – regarding pending results and next stages of state services examinations (SSEs)—was fulfilled partially as the MP Public Service Commission announced recently that it would declare the pending results and hold the next stages of the SSE 2019 and 2021 soon.

Singh, however, expressed apprehension that due to the decision of the government to hold back 13 per cent posts in these exams pending MP HC judgment on OBC quota, the MPPSC decisions might get legally embroiled again.

The agitation by the youth has received support from the opposition Congress with ex-CM and MP Congress chief Kamal Nath writing a letter to Chief Minister Shivraj Singh Chouhan detailing about the demands and the agitation and seeking early resolution.

“The ‘bharti satyagraha’ that started from Indore is now finding supporting voices from lakhs of unemployed youth from villages, towns and cities across the state. Unemployed youth are vociferously putting across their demands and agitating, but the state government is ignoring them totally. The insensitiveness and lack of communication towards the demands of lakhs of unemployed youth is a matter of grave worry. I request you to start a communication with the agitating youth and take a sympathetic view towards the issue concerning the future of the youth of the state and take decision in their favour,” Nath said in his letter.