Did PFI use Tamil Nadu as one of its saddles? 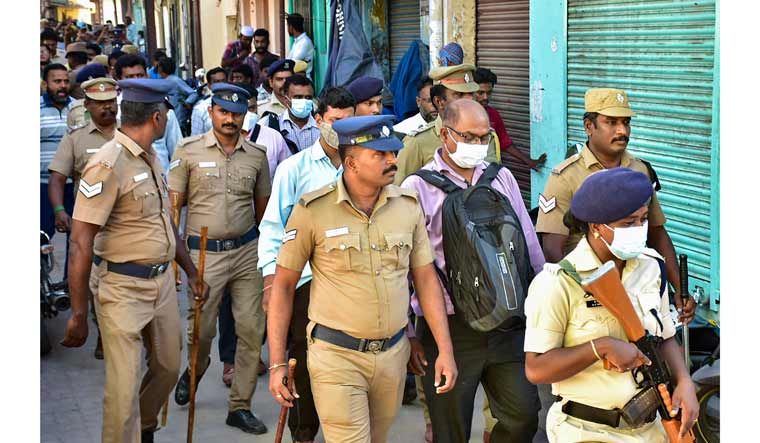 In August 2006, V.Rathnasabapathy, an Assistant Commissioner of Police in the Intelligence wing of Coimbatore district, in West Tamil Nadu went public with his allegations that a Muslim outfit called Manitha Neethi Pasarai (Human Justice Forum) had terror links. Rathnasabapathy was transferred to Ooty as the DSP of the District Crime Branch. The transfer of the police officer was seen as a bid by the then government to appease Manitha Neethi Pasarai (MNP).

It was just a month before Rathanasabapathy’s allegation, the police had arrested four Muslim youths, all linked to the MNP and seized IEDs, detonators, surveillance notes, and maps from them. Police said the five had planned to blow up the Coimbatore Government Hospital, railway station, Collectorate and the district police office. Following this, five Muslim youths were arrested and MNP defended one of the accused in its mouthpiece ‘Vidiyal Velli’. It was later leaked to the media that out of the five arrested, two were neo-converts and had their induction into Islam at the MNP-run 'Arivagam' in Muthuthevanpatty near Theni.

Called ‘Arivagam,’ meaning knowledge centre, the first training centre sprung up at Muthuthevanpatti in Theni district, Tamil Nadu, in the early 90s. ‘Arivagam’ or the Tamil Nadu Development Foundation Trust (TNDFT), was associated with the Manitha Neethi Pasarai (MNP), meaning Human Justice Front. It was a training school like the usual Madarasa. MNP was the then youth wing of the Tamil Nadu Muslim Munnetra Kazhagam (TMMK), one of the popular Muslim outfits in Tamil Nadu. Apparently, MNP is the parent unit of PFI in Tamil Nadu.

The crackdown against Arivagam began as early as 1996. The first camp was in Muthuthevanpatti. The converted Muslim youth, mostly Dalits, were trained at Arivagam about Islam and got indoctrinated.

The training module, which usually would go on for four months, was in four stages which began with the fundamentals of Islam, militant orientation, recruitment for various Muslim outfits, and mass mobilisation. While Arivagam was the training centre for men, the women were trained at Darul Hikmah, at Ervadi in the southern district of Tirunelveli, Tamil Nadu. Darul Hikmah was sponsored by TNDFT to spread Islam in more than 4,000 villages across the State. While Arivagam was the Madarassa for men, Darul Hikmah served women.

Tamil Nadu has been one of the fertile training grounds for Muslim youths since 1996. While the successive AIADMK and DMK governments have busted the training centres every now and then, it had emerged in different modules to educate the Muslim youth about Islam and its importance.

Coimbatore had always been communally sensitive, since 1997, after the murder of a traffic police constable Selvaraj. The killing of Selvaraj and the arrests, the bomb blasts in 1998 during L.K.Advani’s visit, apparently led to the growth of the BJP in the city. In the Lok Sabha elections in 1999, BJP emerged victorious. Later on, once again in 2013, Al-Ummah came to light with the murder of Auditor Ramesh, a popular BJP activist from Salem, who came from the RSS ranks. This again sowed seeds for communal tension in Coimbatore, but the police took control of the situation. The Kottaimedu region in Coimbatore, Tamil Nadu have always been looked at as the ground for Muslim outfits.

Subsequently in 2001, when SIMI was banned, many Muslim youths moved to MNP under Ghulam Mohammed who was a ticket trainer in Southern Railway. In 2006, the training camps in Mettupalayam near Coimbatore came under the police scanner. The police arrested five suspected members of the Manitha Neethi Pasarai, and seized IEDs and detonators. They had planned to blow up certain government establishments in Coimbatore which was busted by police officer Rathnasabapathy. Arrested included one Harun Basha, a leader and two others who go converted into Islam at the youth wing’s 'Arivagam' school in Muthuthevanpatti near Theni.

Following the crackdown in Coimbatore, training schools sprung up at Periyapattinam near Ramanathapuram in South Tamil Nadu, one of the thickly Muslim populated districts in the state. In 2010, a van accident in the region led the police to crackdown on the centres. Youth from across the country came down to Ramanathapuram for training and one of the vans they travelled met with an accident. The locals surrounded the van which caused tension and later led to a crackdown on the training schools. The police outpost which was set up to look into the movement of Muslims in the district was also attacked, as the local Jamath decided against the police monitoring Muslim youth.

However, in 2020, the Tamil Nadu police arrested 35 youths from Periyapattinam for spreading radicalism among Muslim youths in religious training camps. They were said to be members of the Popular Front of India (PFI).

Though there are no designated training centres or schools in Tamil Nadu, the converted Muslim youths get indoctrinated in temporary centres which come up and vanish in a week’s time, according to police sources.

However, PFI Tamil Nadu state secretary Nagoor Meeran denies saying, “We don’t run any kind of training camps. We only do social work. Under our PFI’s Healthy People Healthy Nation programme we have been working among people.” He says that the NIA raids were targeted at the Muslim community as a whole. “We are fighting it democratically and legally,” he told The Week.

Incidentally, the PFI on April 18, filed a complaint with the Chennai police against the BJP, against a voice message circulated among the ruling party members saying PFI was planning for a terror attack. “This was a mischievous statement through a voice message from Annamalai. We filed a complaint against this. It was after this message, our Tamil Nadu Governor R.N.Ravi said that PFI is dangerous,” Nagoor Meeran tells. Tamil Nadu had been used as one of its saddles by PFI and its frontal organisation, after the 1998 bomb blasts in Coimbatore.

A day after the central government issued a ban on the Popular Front of India, the state governments of Tamil Nadu and Kerala declared it unlawful. A notification was issued by the Tamil Nadu government, calling PFI and its associates or its affiliates or fronts an “unlawful association.”

What does the ban mean in Tamil Nadu?

According to highly placed sources, the banning of the PFI under UAPA may not wipe out the organisation in India. But it may help the investigating agencies, probe PFI or its allied groups and their alleged terror links. It may be recalled that several years ago, the Students Islamic Movement of India (SIMI), after the ban in the early 2000s morphed into Indian Mujahideen and PFI. Perhaps, sources say that banning PFI might put an end to the organisation and its activities but not the ideologies it was associated with and that it may transform into several other groups or outfits.

In fact, the crackdown on PFI and its frontal organisation, according to sources, was much anticipated as the Union Home Ministry, after the anti-CAA protests in 2020, had reports on the funding for PFI from countries like UAE, Saudi Arabia, Bahrain, Qatar and Oman.

The ban criminalises the outfit and therefore will immediately lead to forfeiture of its property and freeze its assets. Its frontal outfits like the Rehab Foundation, the Indian Social Forum, and the Indian Fraternity Forum will not get space to operate in India. Also, the PFI office at Muraba, in Al Ain, Dubai, which is said to be active in spreading Islamic fundamentalism and raising funds to be sent to India might come under the scanner. Sources say that many of the PFI leaders visit these countries from where funds are raised and facilitate jobs for Indian Muslims, only to expand the base of the organisation.