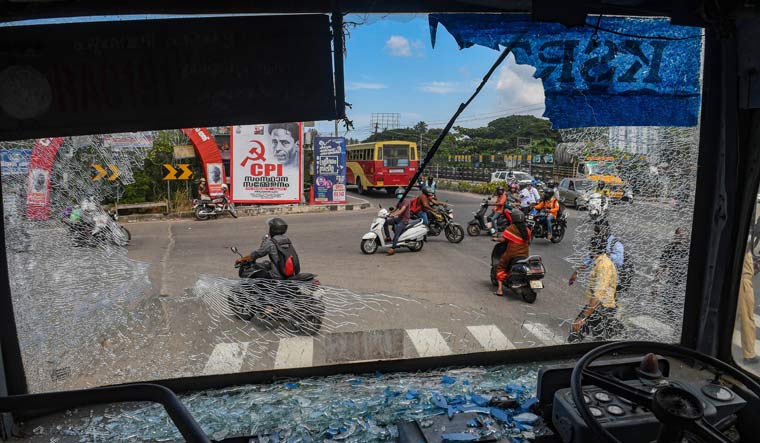 Broken windshield of a Kerala State Road Transport Corporation bus after some miscreants threw stones on it, during the hartal called by PFI, in Thiruvananthapuram

The Kerala High Court on Friday initiated suo motu action against leaders of the Popular Front of India (PFI) for calling a state-wide hartal without permission. The PFI had announced a flash hartal to protest against the arrest of its leaders during nationwide NIA raids on Thursday.

The High Court had in 2019 ordered that nobody can call for a bandh in the state without prior notice of seven days. The court added that the destruction of public property is unacceptable. Normal life has been hit in many parts of Kerala, and incidents of violence were reported from the state on Friday morning. Stones were pelted at Kerala State Road Transport Corporation buses (KSRTC) in various districts including Thiruvananthapuram, Kollam, Kozhikode, Wayanad, and Alappuzha. A petrol bomb was hurled at a vehicle which was carrying newspapers for distribution in Kannur. According to reports, a policeman was hit by a bike in Kollam when he tried to disperse protesters.

Division bench consisting of Justice A. K. Jayasankaran Nambiar and Justice Mohammed Nias C.P. observed that stringent action must be taken against the violators. "Take stringent action against the violators of the court's order. These acts of violence interfering with the life of citizens must be dealt with iron hands. Use all machinery to prevent it," the New Indian Express quoted the Bench as saying.

Kerala police beefed up security and issued directions to the district police chiefs to ensure law and order after the PFI called for the dawn-to-dusk hartal. A statement issued by the police said stern action will be taken against those who violate the law. "All the policemen in the state will be deployed for the maintenance of law and order," the statement said.

The PFI on Thursday had said a hartal will be observed in the state "against the RSS-controlled fascist government's attempt to silence dissenting voices using the central agencies."