Digvijaya Yatra to kick off on October 5

The yatra has three specific demands including renaming India as Bharat 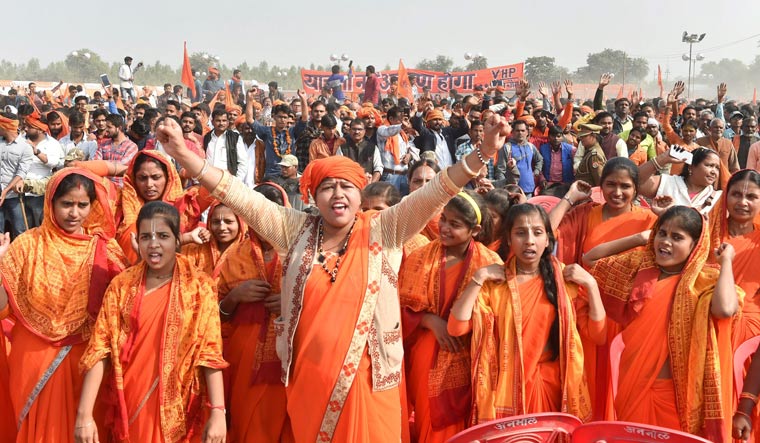 File: Sadhvis participate in 'Dharam Sabha', being organised by the Vishwa Hindu Parishad to push for the construction of the Ram temple, in Ayodhya | PTI

A yatra spanning 15,000 kilometres across 27 states to link India and Nepal is set to kick off on October 5 this year. It has been named the Digvijaya Yatra.

One of the translations of the word is a triumphant march.

Helmed by Jagadguru Shrishakti Shantanand Maharishi, the yatra has three specific demands— renaming of India as Bharat, the inclusion of Ramayan in Indian education and the inclusion of the country’s ‘true’ history in the educational syllabus.

The yatra is to be organised under the aegis of the Shri Ram Das mission and will be supported by the Vishwa Hindu Parishad, as has been the case with previous yatras.

The yatra will start at Ayodhya and culminate there on December 3, 2022.

October 5 is Dusshera, the festival that marks the victory of Lord Ram over King Ravana.

Nepal has a significant role in the Ramayan. Sita for instance was born in Janakpur in Nepal, where the yatra will touch on October 7.

From Ayodhya, it will go to Kathmandu, Pokhara, Butwal, and Nepalgung after traversing through Muzaffarpur. In the South of India, it will weave its way through Kollur, Udupi, Kannur, Malappuram, Pandalam, Madurai, Salem, Tirupati and Puri among other cities between November 6 and 23.

This is not the first time such a yatra has been organized. In 1991, a similar yatra was organized from Kerala to Kanyakumari; in 2010 in Maharashtra; in 2015 in Karnataka; and in 2018 and 2019 from Ayodhya to Rameswaram.

Sharad Sharma, VHP spokesperson said that the body would be responsible for all lodging and food arrangements.

The next plan is to have an ‘Ashwamedha’ yatra for the benefit of the world. 'Ashwamedha' was a horse sacrifice performed by the kings of yore to prove their supremacy.