Khan shared with the media video clippings of him being heckled 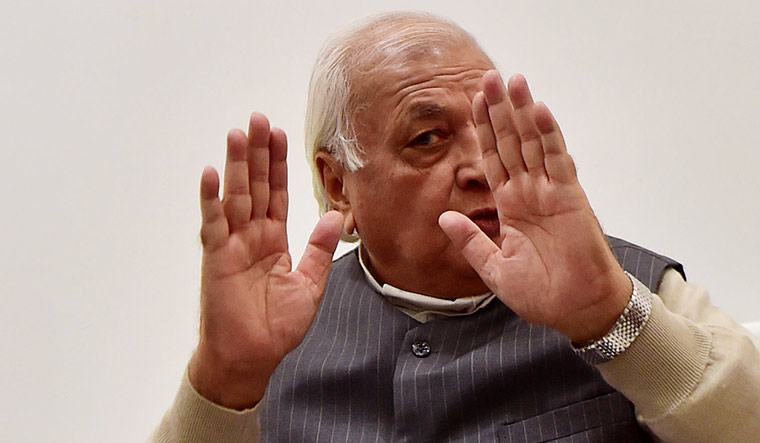 Escalating his offensive against the Left front government, Kerala Governor Arif Mohammed Khan on Monday accused the State of silencing voice of dissent, including that of the Raj Bhavan.

Khan launched an all-out attack against the ruling LDF over issues including his alleged heckling at a varsity in 2019 and the state's revenue generation largely dependent on lottery and liquor sales.

At a news conference here, Khan shared with the media video clippings of him being allegedly heckled at the Kannur University event in 2019 and some correspondence with the government over the functioning of varsities.

Khan, whose outburst came in the wake of the Assembly recently passing a bill apparently aimed at curtailing his powers as Chancellor of universities, charged the State with silencing differing voices and claimed the Raj Bhavan was not spared as well.

Khan, sharing videos of the incident on two wide screens set up at the Raj Bhavan auditorium, said a senior functionary who is now in the Chief Minister's Office (CMO) can be seen in the visuals preventing the police from discharging their functions.

He was referring to K K Ragesh, private secretary to the CM and also hit out at historian Irfan Habib in the context of the 2019 incident.

"In a state where people are arrested for wearing black shirts, these things happen. The police personnel tried to control the situation and stopped the people from reaching me."

"A senior functionary, who is in the Chief Minister's Office, can be seen in the video preventing police from discharging their functions," he said.

"Mr Ragesh stopped the police from doing their duty. Possibly that is why he has been rewarded," the Governor added.

Ragesh was a Rajya Sabha member then.

Khan also asked if the protest at Kannur University was spontaneous why did some of them come prepared with placards.

He further alleged all the attention of the state government was focused on silencing the voice of those differing with it and that even the Raj Bhavan has not been spared.

He said the government tried to interfere in the functioning of the Raj Bhavan by questioning appointments to his staff and therefore, he took action against the same.

"They had to eat humble pie. I knew the man (government official who wrote a letter questioning the appointment) was innocent. But I wanted to send a message that these pressure tactics will not work on me. Even that has not opened their eyes.

"The pressure tactics are continuing even now. That and other reasons prompted me to raise the issue now," the Governor said.

Khan said the state government cannot curtail his powers as it was he who administered the oath of office to them and not the other way round.

In his vehement attack on the Kerala government, Khan said it was a shame the sources of revenue of the state were primarily based on lottery and alcohol sales.