The attack comes ahead of Rahul Gandhi's three-day visit 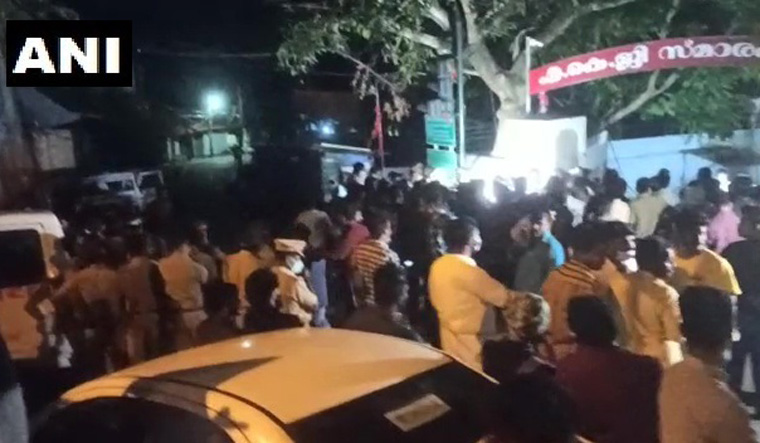 A bomb hurled at the AKG Centre, Kerala CPI(M) headquarters in Thiruvananthapuram, on June 30 at 11:25pm has become the new political bomb in Kerala politics.

CCTV footage suggests that a person who came from the Kunnukuzhy side of the road hurled the bomb. But the police suspect the possibility of a team behind the attack.

City Police Commissioner Sparjan Kumar and his team visited the spot in the night itself, but the team has not got any leads about the attacker so far. “We are looking for some clues,” Kumar told THE WEEK. “We are trying to find them.”

The former speaker in the legislative assembly, M. Vijayakumar, told THE WEEK that the Congress leadership is behind the attack. “You just have to watch the circumstances of this attack,” he says. “Just days before, an organised march, led by the senior leadership of Congress, was conducted to AKG Centre. If that march had reached the AKG Centre, what would have happened? Their goal was to destroy the centre. But the timely intervention of the police stopped the attack. What happened now is the continuation of that.”

Vijayakumar also noted that this is not the first time that the AKG Centre is being attacked by Congress. “In 1983 [October 31] also AKG Centre faced this sort of an attack,” he says. “I was DYFI All India President then. It was an unexpected attack from a group of criminals and KSU activists.”

When the 1983 attack happened, CPI(M) state secretariat was happening inside the AKG centre. Multiple bombs were hurled by the Indira Congress workers who came as a march from the MLA hostel nearby. Eight bombs exploded. Police found four unexploded ones, too. Police also found the container in which the bombs were brought to the scene. “That event had created an earthquake in Kerala politics then,” says Vijayakumar.

Notably, the current attack had happened just hours before the starting of Congress leader Rahul Gandhi’s three-day Kerala visit. The CPI(M) leadership was in defence after SFI activists vandalised Gandhi’s MP office in Wayanad last week. Now, with pinning the responsibility for the bomb attack on the Congress, the red party’s leadership is trying to push the Congress leadership to defence. Meanwhile, the state government has deployed 1,500 police personnel, under the command of IPS officer Rahul R Nair, for the protection of Gandhi.