RJD 'empowers' Tejashwi ahead of key meeting on caste census

All-party meeting is expected to be a brain-storming session 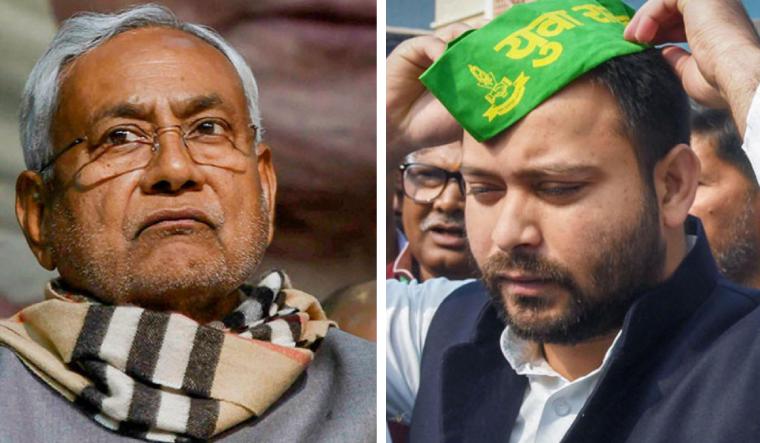 A collage of Nitish Kumar (left) and Tejashwi Yadav | PTI

Bihar Chief Minister Nitish Kumar will on Wednesday lead a meeting of all major parties on the demand for holding a caste census. Nitish's JD(U) and the main opposition RJD have been vocal in their demand for carrying out such a census, but the BJP has been non-committal on the issue.

The meeting, scheduled to be held in Patna around 4pm, is expected “to be a brain-storming one, as the issues like caste, sub-castes and the cases of people without their identifiable caste names will crop up,” The Times of India reported.

The meeting will be held in the auditorium of the CM secretariat in Patna. Legislature parties of all political outfits in the assembly have been sent invites for the meeting. “BJP, JD(U) and Hindustani Awam Morcha (Secular) from the ruling NDA combine and RJD, CPI(ML), CPI and CPM from the grand alliance, as well as the Congress and AIMIM are the political parties with representation in the House,” The Times of India reported.

Meanwhile, on Tuesday, the RJD formally authorised leader of opposition Tejashwi Yadav to take decisions on party affairs, The New Indian Express reported. The decision was taken at a legislature party meeting chaired by party founder Lalu Yadav and attended by other senior leaders. RJD MLA Bhai Virendra was quoted by The New Indian Express as saying “If required, agitation will be launched across the country to press for the demand [for caste census].”

“The RJD has authorised Tejashwi Prasad Yadav to chalk out a strategy for the agitation on caste-based census. RJD state chief Jagadanand Singh said that the young and dynamic leader of the party would lead party's programmes to highlight the issue,” The New Indian Express reported.

Given the commonality of views of the RJD and JD(U) on the issue of a caste census, there has been speculation the issue could lead to a patch-up between the two erstwhile allies. However, last week, Tejashwi dismissed the speculation.