There is speculation Prabhakar Kore could quit the BJP 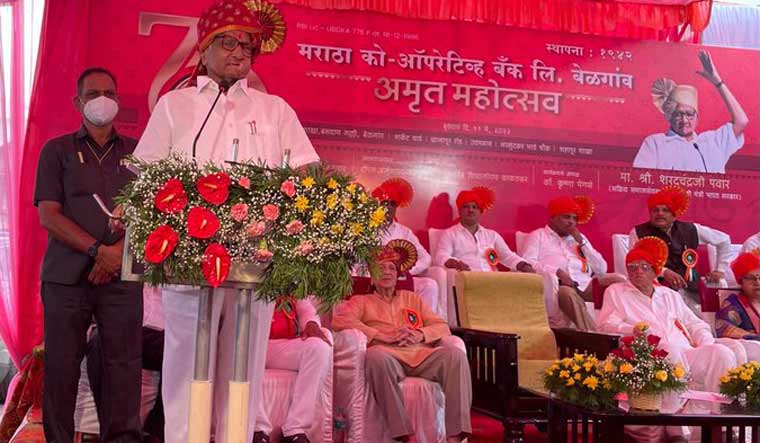 The visit by former Maharashtra chief minister Sharad Pawar to Belagavi district in Karnataka earlier this week is being seen as part of an attempt by his NCP to woo the Marathi-speaking population in the border district ahead of the 2023 assembly elections in Karnataka.

Sharad Pawar's visit has caused intrigue in political circles in Karnataka, especially after Maharashtra Deputy Chief Minister Ajit Pawar—who is an NCP leader and Sharad Pawar's nephew—spoke of his party extending support to the merger of Marathi-speaking villages in Bidar, Bhalki, Belagavi, Karwar, Nippani and other places in Karnataka with Maharashtra. Ajit Pawar's comments evoked a strong reaction from Karnataka Chief Minister Basavaraj Bommai, who asked the Maharashtra politicians to “stop using the language bogey or the border issue for their political survival”. Bommai also reiterated that Karnataka would not give even “an inch of its land” to Maharashtra.

Meanwhile, the NCP is hoping to field its candidates in the 2023 polls in not just Belagavi, but also Bengaluru. However, going by the NCP's past record of drawing a blank despite having contested in 14 constituencies in the 2018 polls, it is clear that the party cannot bank on the Marathi voters alone to win elections. Sharad Pawar's visit to unveil a statue of Lingayat icon Veera Rani Chennamma, who fought the British, in Kittur, is part of the party's bid to woo the Lingayat voters. The community accounts for 17 per cent of Karnataka's population.

Interestingly, Sharad Pawar shared the dais with BJP leader and former Rajya Sabha MP Prabhakar Kore (who is 75) during the valedictory function of the golden jubilee celebrations of Dakshin Maharashtra Shikshan (DMS) Mandal in Belagavi. This has led to speculation on whether Kore is quitting the BJP.

Kore, a Lingayat leader and chairman of the influential KLE Society, is a former Congressman and Rajya Sabha MP (1990-1996) who joined the BJP in 2009 and got nominated to the Rajya Sabha twice (2008-2020) before the party chose late Ashok Gasti (followed by K. Narayan) to succeed him.

While the Kore-Pawar camaraderie since his Rajya Sabha days is well known, the recent meeting has triggered a buzz as insiders suggest that Sharad Pawar is seeking support from Kore to woo the Lingayats, who are staunch supporters of the BJP.

While, Sharad Pawar is banking on Kore's good equation with Lingayat strongman and former chief minister B.S. Yediyurappa and also the Lingayat mutts in the North Karnataka region, the NCP wresting seats in the Lingayat belt seems far-fetched given the community's affiliation towards the saffron party. Moreover, the BJP has strong Lingayat leaders in the region who hold sway over the community and can deliver better electoral outcomes compared with Kore.

On the other hand, the NCP's focus on the language and border issue and its pro-Marathi stand is a major impediment for it to make inroads in the region where only three assembly constituencies (Nippani, Khanapur and Belagavi Rural) have sizeable Marathi-speaking populations. As both the national parties would like to be seen as pro-Kannada parties, it leaves NCP with little choice but to align with smaller parties like Shiv Sena and Maharashtra Ekikarana Samiti in Karnataka.

According to BJP sources, Prabhakar Kore is feeling sidelined in the BJP and is now hoping to secure the political future of his son, Amit Kore, by seeking a ticket for him from either of the two national parties to contest from Chikkodi. Amit is currently in the Congress party and there are chances of Prabhakar Kore joining the Congress, along with a few BJP leaders from the region.