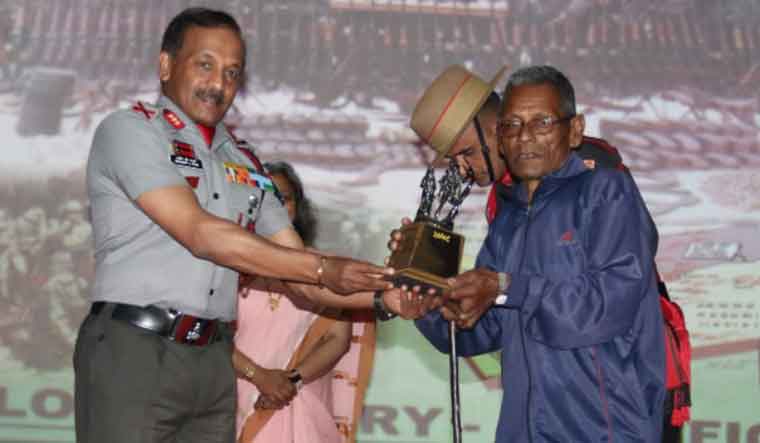 Memories of courage and valour of the Assam Rifles jawans were revisited recently when director general of Assam Rifles, Lt Gen P.C. Nair, visited Nepal and met some of the surviving members of the force's 7th battalion which killed 72 militants, apprehended 13 more and seized cache of arms and ammunition 30 years back in Kashmir—a national record till date.

On May 9, the legends of Operation Dudhi were felicitated at Shillong, the headquarters of the force, by their peers and long-standing admirers.

A senior officer of the Assam Rifles said: “Resembling a tale of mythic proportions, operation Dudhi will forever remain etched in the annals of the history of Assam Rifles.”

Conducted on May 3, 1991, Operation Dudhi was undertaken by a column comprising of junior commissioned officers (JCOs) and 14 other ranks under the command of Subedar Padam Bahadur Chetri. The column moved from battalion headquarters, Chowkibal, for a routine patrol to check the winter vacated post of Dudhi, with the staging camp established at Bari Baihk. Located about 13km away from the battalion's headquarters, the camp was covered with five to six feet of snow. The staging camp was established on May 4, 1991 and the track towards Dudhi was cleared the same day. The next day, the column began moving towards Dudhi post. When they were just 1km from the post, things took a deadly turn as militants had infiltrated into Indian territory after crossing the 14,000 feet high Eagle Pass. They fired at the column, which then retaliated and discovered more than 100 militants camping in the area on the western part of the Dudhi post.

“Despite being greatly outnumbered, the troops of the 7th battalion were unfazed. On the contrary it only firmed their resolve to eliminate the militants,” said the officer.

Equipped with only 7.62 mm self-loading rifles and light machine guns, the brave soldiers used tactics to surround enemies who were armed with sophisticated weapons. They then brought down heavy fire at the militants. The battle lasted for more than six hours until reinforcement arrived in the form of three columns consisting of one JCO and 25 other ranks under a major rank officer; 35 other ranks led by another Major rank officer; and a medical corps team led by another Major rank medical officer. The entire river belt in the locality turned red with blood of the militants. Interestingly, many years later, today also few hundreds of Assam Rifles have been present in Kashmir to fight the militants. What clicked that time was the jungle warfare expertise of Assam Rifles. The next 96 hours were used to carry out search operations and sanitise the area. A huge cache of weapons and ammunition including 70 AK-47 rifles were seized.

Subedar Chetri, one of the last surviving men of the iconic operation, came down to Shillong for the events on May 9. Lt Gen Nair requested him to inaugurate a Sainik Institute in Shillong. Gen Nair used his trip to Nepal to strengthen the military relationship between India and Nepal as many Nepalis hold different ranks—commissioned and non-commissioned—as officers of Assam rifles. He had also met Nepal's army chief in Kathmandu.