Access, equity, inclusivity and quality are the objectives of NEP, says PM 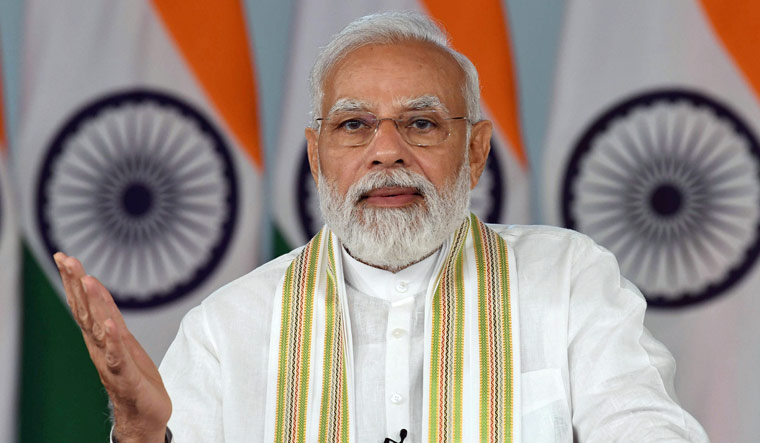 Prime Minister Narendra Modi on Saturday advocated developing a hybrid system of online and offline learning to avoid overexposure of schoolchildren to technology, as he chaired a high-level meeting to review the implementation of the National Education Policy (NEP).

The new policy is being rolled out with the objectives of access, equity, inclusivity and quality, he said, according to an official statement.

Modi said the databases maintained by anganwadi centres should be seamlessly integrated with school records as children move there from anganwadis, and called for their regular health check-ups and screening in schools with the help of technology.

Pitching for emphasis on the use of indigenously developed toys to develop conceptual skills in students, he also suggested that secondary schools with science labs should engage with farmers in their area for soil testing, the statement said.

Lauding the new education policy, he said from special efforts to track out-of-school children and bring them back into the mainstream and the introduction of multiple entry and exit in higher education, many transformative reforms have been initiated that will define and lead the progress of the country as it enters the 'Amrit Kaal'.

Referring to multi-disciplinarity in higher education, it said he was informed that the guidelines for multiple entry-exit for flexibility and lifelong learning along with the launch of academic bank of credit on digilocker platform will now make it possible for students to study as per their convenience and choice.

In order to create new possibilities for lifelong learning and centrally involve critical and interdisciplinary thinking in learners, the UGC has published guidelines according to which students can pursue two academic programmes simultaneously.

The National Higher Education Qualification Framework (NHEQF) is also at an advanced stage of preparation, while the UGC is revising the existing Curriculum Framework and Credit System for Undergraduate Programme in alignment with the NHEQF, it said.

In order to encourage an ecosystem of start-up and innovation, it said, 2,774 innovation councils have been set up in higher education institutions in 28 states and six union territories.

The Atal Ranking of Institutions on Innovation Achievement (ARIIA), aligned with the NEP, has been launched in December last year for creating a culture of research, incubation and start-ups.

As many as 1,438 institutions participated in ARIIA, 100 institutions have been funded by the AICTE with industry participation for idea development, evaluation and application (IDEA) labs for experiential learning rather than rote learning, it said.

Laying emphasis on multi-modal education, it said, online, open and multi-modal learning have been promoted vigorously by both schools and higher education institutions.

This initiative has helped in reducing the learning loss due to the COVID-19 pandemic and will contribute greatly in reaching education to remote and inaccessible parts of the country, it said.

Swayam, Diksha, Swayam Prabha, Virtual Labs and other online resource portals have all seen sharp rise in traffic and student registrations. These portals are providing study materials in multiple Indian languages, sign language and in audio formats for the visually impaired, it said.

In addition to the above, the UGC has notified Open and Distance Learning (ODL) and Online Programmes Regulations under which 59 higher educational institutions are offering 351 full-fledged online programmes and 86 higher education institutions are offering 1,081 ODL programmes. The permissible limit of online content in a programme has also been raised to 40 per cent, it said.

It added that stress has also been given to multi-linguality in education and testing to ensure that lack of knowledge of English does not impede the educational attainment of any student.

With this objective in mind, states are publishing bilingual and trilingual textbooks at foundational level and content on DIKSHA platform has been made available in 33 Indian languages.

The NIOS has introduced Indian Sign Language (ISL) as a language subject at the secondary level.

Technical book writing is being undertaken in Hindi, Marathi, Bengali, Tamil, Telugu and Kannada, it said, adding that engineering courses are being offered in six Indian languages in 19 engineering colleges across 10 states from 2021-22.