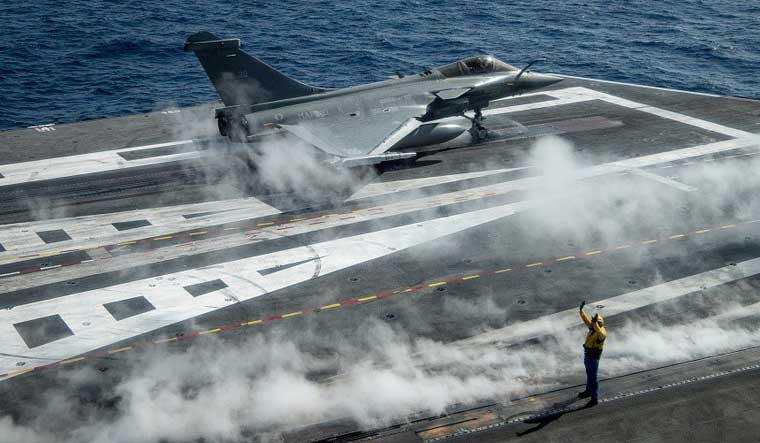 The race to sell a new aircraft carrier-based fighter jet to the Indian Navy is heating up. Last week, US manufacturer Boeing announced it would be deploying two F/A-18 E/F Super Hornet fighters to an Indian Navy test facility in Goa for flight trials.

On Wednesday, French media outlet La Tribune reported the French government has been studying “for several months” the sale of four used 'Rafale Marine' jets to the Indian Navy.

The Rafale Marine is the carrier-borne variant of the Rafale fighter, which is already in service with the Indian Air Force.

The Rafale Marine and Super Hornet are considered the front-runners to win a contract that would involve supply of up to 57 jets to the Indian Navy. These jets would primarily operate off the aircraft carrier Vikrant, which is currently undergoing sea trials.

La Tribune reported France had been studying the sale of used Rafale Marine jets to gain an edge to win the larger contract from the Indian Navy.

La Tribune reported “the sale of four used Rafale Marine to the F3-R standard is likely to give a competitive advantage to France against the Americans in the context of the Indian call for tenders to equip the INS Vikrant. These four recently modernized devices could indeed be quickly put into service on the Indian aircraft carrier.” The 'F3-R' is the current production standard of the Rafale. Aircraft of the F3-R standard have the capability to fire the Meteor long-range air-to-air missile and use the Talios target acquisition pod, in addition to being equipped with upgraded sensors and electronics.

The report noted the Rafale Marine, which is smaller in dimensions than the Super Hornet, is well suited to the Vikrant. “... it can in particular easily use the elevators of the INS Vikrant. Which would not be quite the case for its American rival,” La Tribune reported.

La Tribune claimed India could decide to buy up to 26 new naval fighters by the end of the year. The La Tribune report comes days before Prime Minister Narendra Modi is scheduled to visit France.

When design work on the Rafale started in the 1970s, it was envisaged to be one aircraft that would replace nearly all fighter aircraft then flying in the French Air Force and Navy.

The Rafale Marine formally entered service with the French Navy in 2004. In fact, the Rafale Marine variant precedes the air force variant of the Rafale. While the two aircraft types are largely identical, the Rafale Marine is heavier due to having a reinforced undercarriage and nose wheel to deal with impact of carrier take-offs and landings and also a stronger 'arrester' hook to catch the wires that bring the aircraft to a halt on landing.

In January, the French Navy dispatched two Rafale Marine jets to India for trials at the Goa facility where the Super Hornet will be tested. The tests in Goa are being done to evaluate the two aircraft for their capability to operate off ski-jumps. La Tribune reported the Rafale Marine “carried out very successful trials” in Goa and “French Navy was able to demonstrate all its expertise in naval aviation (landing) and convinced the Indians of the performance of the Rafale Marine.”

During the tests in January, a blogger shared an image of a Rafale Marine jet flying with an Exocet anti-ship missile, two 2,000 litre fuel tanks and four MICA air-to-air missiles. French analysts claimed this configuration showed the Rafale Marine could take off from a ski-jump with an external load of over 5.5 tonnes, nearly matching the maximum weight of jets taking off from the French Navy aircraft carrier Charles De Gaulle, which uses a catapult to launch aircraft. Aircraft using catapults can take off at heavier weights than those using ski-jumps.