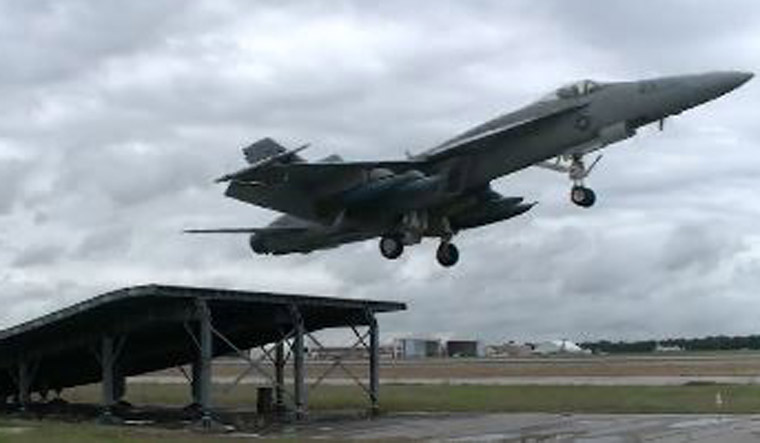 The Super Hornet is competing for an Indian Navy contract for fighter aircraft to operate off the aircraft carrier Vikrant, which is undergoing sea trials. The naval variant of the French Rafale is considered the primary competitor to the Super Hornet for the Indian Navy contract, which originally envisaged the sale of 57 jets. The Indian Navy tender for 57 jets was initially announced in 2017. At the time, it was estimated to be worth at least $6.6 billion.

The trials in Goa would examine the capabilities of the Super Hornet to take off using a 'ski-jump', which is the only aircraft launch method of the Indian Navy's current aircraft carriers—INS Vikramaditya and the Vikrant. The trials are necessary to assess the payload and performance characteristics of the aircraft. Aircraft such as the Super Hornet and Rafale serving in the US Navy and French Navy, respectively, use catapults when taking off from aircraft carriers. The French Navy deployed two Rafale jets to the INS Hansa test facility in Goa for the ski-jump tests in January.

On Wednesday, a Boeing executive confirmed to UK-based FlightGlobal the company would send aircraft for tests to India in the May-June time frame.

Flight Global reported “The work will involve a composite team of Boeing and USN (US Navy). Different aircraft configurations, such as air-to-air, air-to-surface, and anti-ship will be demonstrated.”

Alain Garcia, vice-president of India business development for Boeing Defense, Space & Security, spoke to FlightGlobal. FlightGlobal reported “He [Garcia] feels the type will integrate well with other US equipment in service with the Indian navy, such as the Lockheed Martin/Sikorsky MH-60R anti-submarine warfare helicopter and Boeing P-8I Neptune, the Indian variant of the 737-derived P-8A. Moreover, a Super Hornet acquisition would also allow the Indian Navy to work more closely with the USN and Royal Australian Air Force, both of which operate Super Hornets.”

Garcia listed some capabilities of the Super Hornet such as its advanced electronically scanned array (AESA) radar, large cockpit displays and 'open systems' architecture, which allows for easier upgrades to electronics.

Garcia also declared Boeing “has provided New Delhi with considerable analysis of how Super Hornets would fit aboard Indian carriers, on the flight deck as well as in the hangar”. The Super Hornet was designed with the capability to fold its wings, whereas the naval Rafale cannot.

“Garcia says that one advantage that the Super Hornet has over Rafale is the ability to fold its wings, allowing for an easier elevator fit. In addition, Boeing has devised a way for Indian deck crews to move the Super Hornet onto and off Indian carrier elevators,” FlightGlobal reported. This is considered an advantage on the small elevators on the INS Vikramaditya and Vikrant.

Garcia also stressed the Super Hornet had a twin-seat variant operating off aircraft carriers, while the naval version of the Rafale was only available in a single-seat version. Twin-seat jets are considered more suited for long-range missions and tasks such as electronic warfare and ground attack.

Garcia told FlightGlobal “They’ll [Indian Navy] really be able to see how accurate the Super Hornet is in its ability to land on any given flight deck area. We’re so confident that we actually told the Indian navy that we’re more than happy—if they have an aircraft carrier parked off the coast of Goa—to go fly out there and demonstrate it on the aircraft carrier itself.”