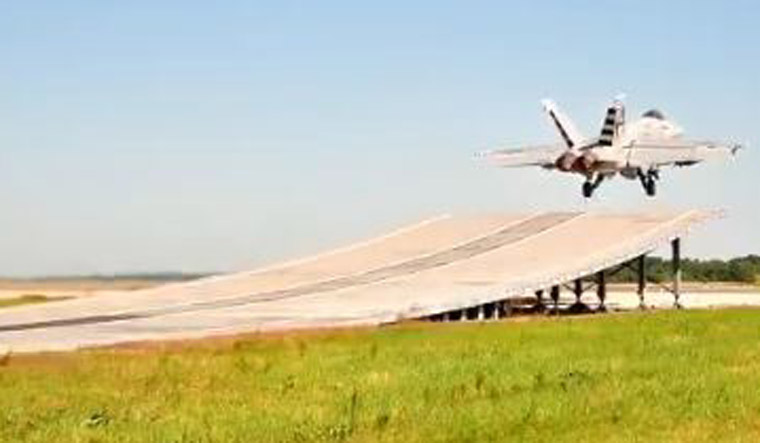 US aerospace giant Boeing on Monday released footage of its F/A-18 E/F Super Hornet fighter taking off from a 'ski-jump' during tests aimed at winning a contract from the Indian Navy for 57 aircraft.

In August, Boeing had revealed that it was conducting tests for launching the Super Hornet off a ski-jump at the US Navy's base at Patuxent River in Maryland.

The US Navy uses catapults to launch aircraft, such as the Super Hornet, from its aircraft carriers. A catapult imparts additional momentum to the aircraft, enabling it to take off with maximum weight from a carrier, which has less runway length than an airfield. But catapults have high-power generation requirements that are typically not available on non-nuclear-powered aircraft carriers, such as those the Indian Navy will use for the foreseeable future.

The Indian Navy's existing aircraft carrier, the INS Vikramaditya, and the under-construction Vikrant, have ski-jumps. A ski-jump is a curved ramp at the end of a runway that force an aircraft upwards without it reaching maximum speed. The website of the US F-35 stealth fighter explains a ski-jump as simultaneously launching "aircraft upward and forward, enabling take-offs with more weight and less end-speed than required for an unassisted horizontal launch".

A US Navy publication, Naval Aviation News, had reported about the tests of the Super Hornet from the ski-jump in late November and published a photograph.

Interestingly, Naval Aviation News reported representatives from the Indian embassy in the US had witnessed a ski-jump launch.

What the tests mean

Ankur Kanaglekar, a Boeing executive, told The Hindu, “The first successful and safe launch of the F/A-18 Super Hornet from a ski-jump begins the validation process to operate effectively from Indian Navy aircraft carriers.”

Kanaglekar touted the capabilities of the 'Block III' variant of the Super Hornet that Boeing is offering the Indian Navy. The Block III variant offers more advanced electronics and cockpit displays and the capacity to be fitted with extra fuel tanks atop its wings to boost range.

“The F/A-18 Block III Super Hornet will not only provide superior war fighting capability to the Indian Navy but also create opportunities for cooperation in naval aviation between the United States and India. The F/A-18 Block III Super Hornet will offer unrivalled growth potential to the Indian Navy through single and two-seater carrier-compatible variants and the ability to interface with the P-8I as a force multiplier," Kanaglekar was quoted as saying by News 18.

Boeing had touted ski-jump compatibility for the Super Hornet to attract the Indian Navy as far back as 2008. In 2008, a Boeing official told Hindustan Times about simulations of ski-jump launches. “In our simulation, we discovered that not only could the Super Hornet take-off from a ski-jump, but could do so with a significant weapons load," the official told Hindustan Times.

The Super Hornet and the naval variant of the Rafale, named the Rafale-M, are considered the front-runners for the Indian Navy's requirement for 57 jets.