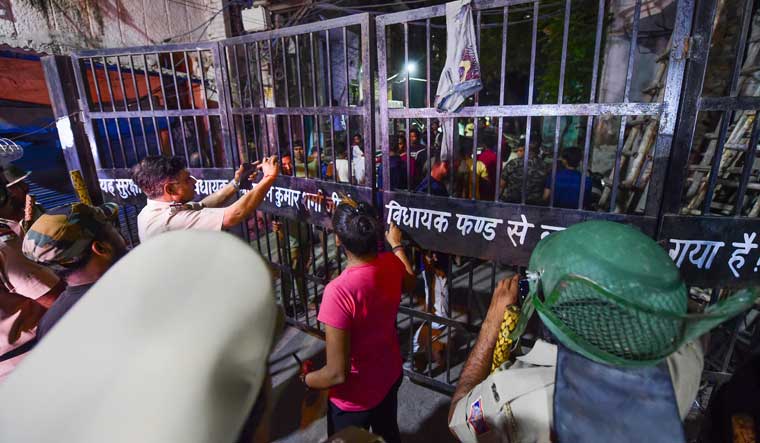 The Delhi Police announced on Sunday morning that it had arrested nine people in connection with the communal violence in northwest Delhi's Jahangirpuri area the previous evening.

Delhi Police DCP Usha Rangnani was quoted by ANI as saying “nine persons including 8 police personnel and 1 civilian were injured and treated in a hospital. One Sub-inspector sustained a bullet injury. His condition is stable.”

Deployment of police and personnel of the Rapid Action Force continued in Jahangirpuri on Sunday morning.

Special Commissioner of Police (Law and Order) Depender Pathak was quoted by Times Now as saying “Situation is under total control; the atmosphere is peaceful. We are in continuous touch with people and are appealing to maintain peace and not pay heed to rumours. An adequate number of police officials are here for protection.”

The violence in Jahangirpuri erupted after stones were pelted at a procession to mark Hanuman Jayanti. Delhi BJP chief Adesh Gupta and party MP Manoj Tiwari said the attack on the procession was “not a spontaneous incident, but a conspiracy”.

Former AAP minister and BJP leader Kapil Mishra said the stone pelting on the procession was a “terrorist attack” and demanded immediate expulsion of illegal immigrants from the country.

The Delhi BJP president said he would meet Union Home Minister Amit Shah and urge him to order a probe into the violence. He also questioned how the settlement of Rohingyas and Bangladeshis living illegally in Delhi were provided water and electricity connections.

“I want to ask (Chief Minister) Arvind Kejriwal why is he providing water and electricity to Rohingyas and Bangladeshis living illegally in the city,” Mishra said in a video message.

North East Delhi BJP MP Manoj Tiwari, who had earlier raised the issue of illegal immigrants living in the city, said those protecting such settlers were a “bigger” threat.

“Illegal migrants are big threat and need to be investigated as they are spoiling the harmony of our nation. People who are protecting and helping them settle here are a bigger threat!” he tweeted after the incident.

Security was tightened in areas of Uttar Pradesh adjoining Delhi following the violence in Jahangirpuri. The Indian Express reported police increased patrolling in the three zones of Noida: Noida, Central and Greater Noida. Uttar Pradesh Police took out a flag march in crowded areas of Noida.

In Meerut, ANI reported the situation was normal, and the local police had assured of timely action in the event of a law and order situation.