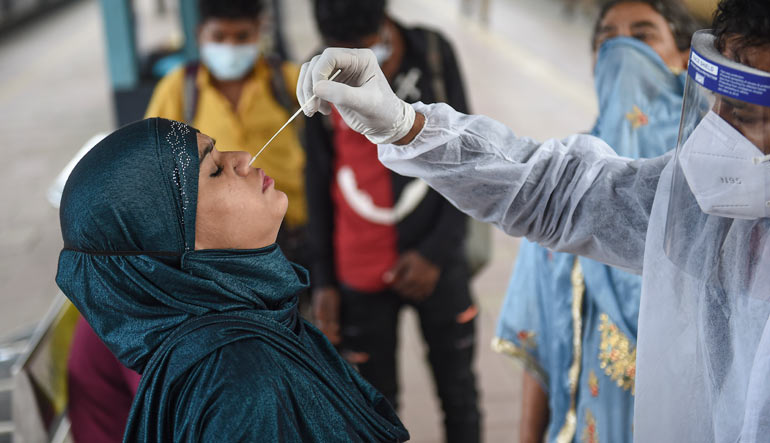 Flagging a decline in the number of Covid-19 tests in many states and union territories, the Centre on Monday asked them to enhance testing so that an effective track of the spread of the pandemic can be kept and immediate citizen-centric action can be initiated.

In a letter to states and UTs, Additional Secretary in the Union Health Ministry Arti Ahuja advised them to pay attention to this aspect immediately and increase the testing in a strategic manner keeping in view the trend of case positivity in specific areas.

She highlighted that Omicron, which has been designated by the World Health Organization (WHO) as a variant of concern, is currently spreading across the country.

Referring to the ministry's earlier letters and the Home Ministry advisory of December 27 last year laying out the broad framework of pandemic management in the context of Omicron, Ahuja said testing remains a key and crucial component.

"However, it is seen from the data available on the ICMR portal that testing has declined in many states and union territories," she wrote.

She said in all advisories on testing issued by the Indian Council of Medical Research (ICMR), including the latest on January 10, the basic objective remains early detection of cases for quick isolation and care.

In addition, testing remains a key strategy for pandemic management as it helps in identification of new clusters and new hotspots of infection which can in turn facilitate immediate action for containment such as setting up of containment zones, contact tracing, quarantining, isolation and follow-up.

This can enable the state and district administrations to curb the spread of infection. Also this will ensure reduction in mortality and morbidity.

"Progression of disease to a severe category can be averted by strategic testing of those who are at high risk and more vulnerable, as well as in areas where the spread is likely to be higher," Ahuja said.

Reiterating the advisory on purposive testing strategy issued by the ICMR on January 10, she said in community settings all those who are symptomatic must be tested and all at-risk contacts of laboratory confirmed cases must also be tested.

This advisory needs to be read in conjunction with the earlier guidelines and advisories of the Ministry of Health and Family Welfare, wherein it has been recommended that strategic and focused testing should be done of people who are vulnerable, living in closed surroundings, in densely populated areas in emerging new clusters and new hotspots of positive cases, etc., Ahuja said.

"In order to ensure that an effective track of the spread of the pandemic is kept and also immediate citizen-centric action is initiated, it is incumbent upon all states/UTs to enhance testing," she said.