In every village in Kerala, there is a library, says Kovind 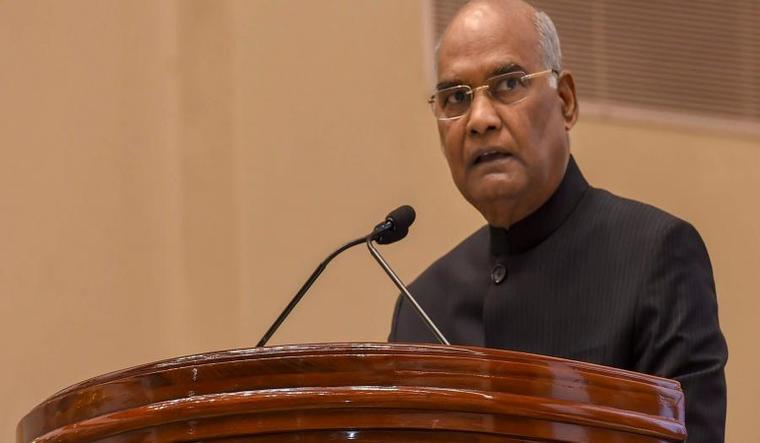 Kerala leads other states on several indices of human development, including aspects of sustainable development and successive governments in the state have kept a sustained focus on the agenda of growth and development, President Ram Nath Kovind said on Thursday.

Addressing a gathering after unveiling the statue of P.N. Panicker, considered as the father of library movement in Kerala, at Poojappura in the state capital, he said it's a unique feature of Kerala that in every village there is a library and people feel an emotional connect with the library in their village or town.

The President praised Governor of Kerala, Arif Mohammed Khan and Chief Minister Pinarayi Vijayan, saying they were among the "most experienced and sagacious personalities" in the area of public service.

"I am glad that the people of Kerala are benefitting from the guidance of the Governor and the leadership of the Chief Minister to scale even greater heights of excellence and inclusion," Kovind said.

Lauding the service sector professionals from Kerala, especially the nurses and doctors, he said they are highly respected and relied upon by people everywhere.

"Recently, when the Covid affected the entire world, nurses and doctors from Kerala were among the most visible Covid-warriors in India, the middle-east and so many other regions on the globe. The people of Kerala enhance the pride of India," the President noted.

Earlier in the day, Kovind unveiled the statue of Panicker in the presence of Khan, Vijayan, Union Minster of State V Muraleedharan and others.

"A visionary can see what others don't see. I believe that Shri Panicker would have seen his pioneering steps leading to the great strides Kerala took in the areas of literacy and education. An area of illiteracy can remain an area of darkness. The light of literacy can brighten the path to individual and collective progress," Kovind said.

The President further said Panicker made libraries and literacy a movement of the people and in fact, he made it a popular cultural movement.

"It is a unique feature of Kerala that in every village, even in the remotest villages, there is a library. People feel an emotional connect with the library in their village or town just as they feel a special connect with the temple or church or mosque or school. Libraries created by the movement of Shri Panicker later became nerve centres of all social and cultural activities of which the literacy movement of Kerala is an impressive example," Kovind said.

He pointed out that the "Granthashala Sangam" started by Panicker with about 50 small libraries in 1945 grew into a large network of thousands of libraries and through this, the common people of Kerala could get to know the ideals of Sree Narayana Guru, Ayyankali, V T Bhattathiripad and other great masters.

"The cosmopolitan outlook of an average person from Kerala can be traced to the library and literacy movement of Shri Panicker... Kerala leads other states on several indices of human development, including aspects of sustainable development. Successive governments in Kerala have kept sustained focus on the agenda of growth and development. Therefore, the State has maintained its leadership position on several markers of excellence," Kovind said.

Speaking on the occasion, Governor Khan said the statue of Panicker reminds of not just his efforts towards spreading literacy, but also how libraries enabled Kerala's rise and transformation into the most literate state in India.

"The library movement, initiated by Panicker enabled the increase from less than 50 libraries to a network of over 6,000 libraries. As a token of gratitude the government of Kerala has been observing June 19, the day of his demise as Reading Day," Khan said.

Vijayan, in his speech, said the library movement has greatly contributed towards he development of the state.

"Certain forces are trying to bring back superstitions and irrational beliefs into the society and we can keep such forces at bay with knowledge through reading. Libraries played a major role in developing our society with the ideas of equality and brotherhood. This view helped our national movement and the renaissance movement," the CM said.

The farsightedness and relentless efforts of Panicker led to setting up of numerous libraries across the state making Kerala a literary society.

The President will be staying at the Raj Bhavan and will visit Padmanabha Swamy Temple here in the evening. He will return to New Delhi tomorrow.