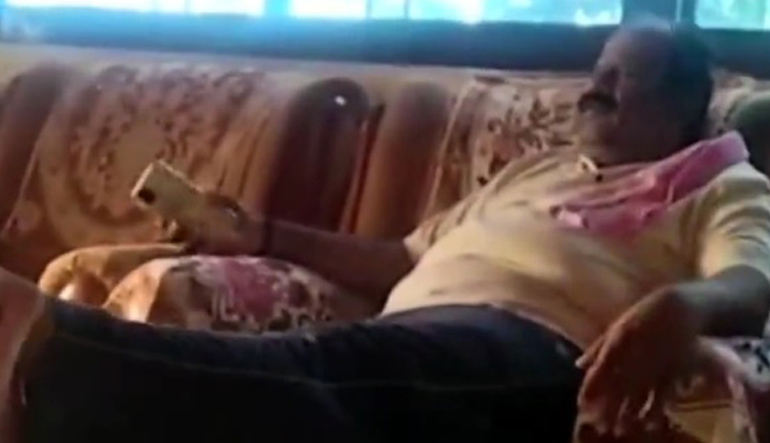 A video of a Congress leader allegedly plotting to kill a BJP MLA in Bengaluru has gone viral, exposing the deteriorating state of Karnataka politics. The CCB police launched a probe into the case following a complaint from the MLA.

In the video, Congress leader M.N. Gopalakrishna is heard making plans with one ‘Kulla’ Devaraj to “finish off” his political rival S.R. Vishwanath, the BJP MLA from Yelahanka (Bengaluru).

Gopalakrishna, who lost the 2013 and 2018 assembly elections (came third), can be heard saying he would need around Rs 100 crore to defeat Vishwanath in the elections and the easier way out was to spend a few crores to “eliminate” him. The conversation also reveals that the duo knew about Vishwanath’s daily routine and they decided to attack him at his farmhouse when he would be all alone.

Vishwanath, who held a press meet on Wednesday, said he had received an “apology letter” from Devaraj on Tuesday evening. “I have filed a complaint against Gopalakrishna and Devaraj at the Rajanukunte police station. I am shocked to learn Gopalakrishna plotted to kill me. I got a letter delivered to my home yesterday where Devaraj admitted that he was forced to join hands with Gopalakrishna as he was going through a financial crisis. I have apprised the chief minister and home minister about the conspiracy. I have never indulged in hatred. But I had a feeling something was brewing for some time now,” said Vishwanth

The MLA said he got to know that the hired killers had been put up at a hotel in Yelahanka.

KPCC chief D.K. Shivakumar rubbished Vishwanath’s claims and accused him of being friends with rowdy elements. “I will give the list of rowdies who are close to Vishwanath,” he said.

Talking to reporters, Gopalakrishna dismissed the video as “fake” and maintained he had no need to resort to such criminal activities. “Vishwanath is making up stories. Kulla Devaraj was with me since 2013, but joined Vishwanth a few months back. This is a conspiracy by the MLA himself. The police should check the call records of Kulla Devaraj and Vishwanth to know the truth.”

Slamming Shivakumar, Vishwanath said, “DK is my brother. But I will not expect any support from him or the Congress party, which failed to stand by their own party leader Akhanda Srinivasmurthy, when he was under attack.”

“I have no business with Kulla Devaraj though I know him,” clarified Vishwanth.

Home Minister Araga Jnanendra expressed shock over the “low-level politics” being played out in the state and assured that the investigation would bring out the truth and the aggrieved MLA would be given security cover.