Ahead of the 37th anniversary of the disaster, survivors decry denial of justice 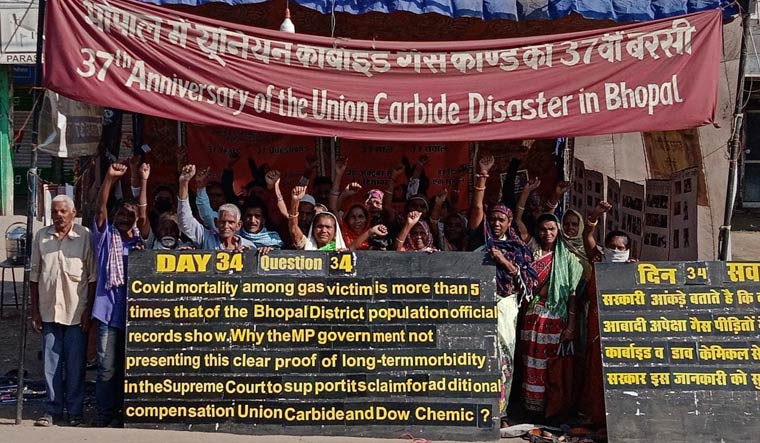 Ahead of the 37th anniversary of the Bhopal gas tragedy and the conclusion of their '37 years – 37 questions' campaign, survivors of the tragedy have condemned the state and central governments for denying them justice and a life of dignity.

The survivors have said that their 37 crucial questions related to various unresolved aspects of the tragedy elicited little response from the governments.

Bhopal gas tragedy – considered the worst industrial disaster witnessed by the world – struck just after midnight of December 2, 1984, as deadly methyl iso-cyanate (MiC) gas leaked from the Union Carbide factory killed thousands immediately and maimed lakhs for life. Many of the survivors succumbed to the effects during the course of years afterwards.

Survivors grapple with long-term health and economic impacts of the disaster and even their second and third generations face congenital health issues. Survivors' organisations have been raising several issues with the central and state governments for the past many years.

This year, survivors have been posing one question each every day for the past 37 days on issues of failure to provide enhanced compensation, justice in the criminal case, lack of proper medical care, rehabilitation, failure of the government to remediate the toxic waste in and around the abandoned Union Carbide factory and others.

They gathered everyday at a spot near the abandoned factory and displayed placards and posters on issues of the day. However, no response came from the governments except for replies to six of the questions to a section of media, Rachna Dhingra of Bhopal Group for Information and Action, one of the four survivors' organisations, told THE WEEK.

Earlier at a press conference, Rashida Bee, president of the Bhopal Gas Peedit Mahila Stationery Karmchari Sangh said, “We regret to say that that the reason, no survivor has received adequate compensation and none of the culprits of the disaster has gone to jail for a minute till this day, is that our democratically elected governments continue to collude with the American corporations.”

Shehzadi Bee of the Bhopal Gas Peedit Mahila Purush Sangharsh Morcha said, “The crowds in the hospitals, uninformed and indiscriminate prescription of potentially harmful medicines and the helplessness of the patients remain the same as that on the next morning of the disaster. Even today, there are no standard treatment protocols for chronic diseases of the lungs, heart, kidneys and the endocrine, nervous and immune systems caused by Union Carbide’s gases. Because the government has stopped all research on the health impact of the disaster, it is Union Carbide alone that has all the medical information and the corporation is still claiming them to be trade secrets.”

“Instead of claiming compensation from Dow Chemical, USA (the current owner of the Union Carbide Company) for the environmental damage caused due to contamination of soil and groundwater, the Madhya Pradesh government is planning to build a memorial on top of a global toxic hotspot to help the corporation escape its legal liabilities in Bhopal,” said Rachna Dhingra.

Nousheen Khan of Children Against Dow Carbide said, “The state and central governments have failed the next generation of the half million survivors. Scientific studies published in international journals show that the health of the children born to the gas exposed parents is considerably impacted. Tens of thousands of children had to drop out of school because of their parents’ being affected by the disaster. Yet the governments have done next to nothing to seek compensation for them or to provide them with gainful employment.”

When contacted, the director of the gas relief and rehabilitation department, Basant Kurre, told THE WEEK that the department could not have responded to the questions posed by the survivors on a daily basis, especially when they were not officially communicated to the department. We have taken cognizance of the issues raised and we will respond/take action accordingly. We are with the survivors; they have gone through a tragedy of the worst kind in human history and we are ready to help them as much as possible. But we have limitations too. We are already working on several issues raised by them and quite a number of things are already in process. Whatever is new, we will try to resolve them too,” the director said.