Explained: What is driving targeted killing of civilians in Kashmir? 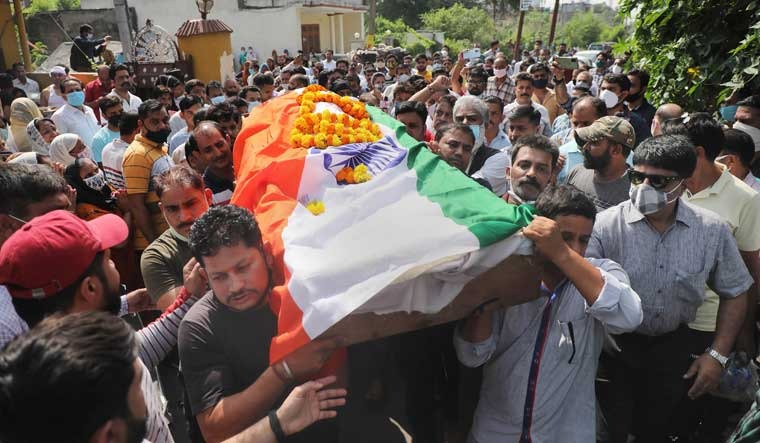 After Article 370 of the Constitution was revoked on August 5, 2019, there were fears in Jammu and Kashmir about demographic change by the BJP and the RSS. Article 370 had barred outsiders from settling in the former state.

There was little resistance to the revocation as the Union territory (UT) was put under a strict security and communication lockdown for weeks. In October that year, five Muslim labourers from West Bengal were killed by militants in south Kashmir’s Kulgam district. The same month, a new militant group, The Resistance Front (TRF), which police says is Lashkar-e-Taiba (LeT) in disguise, emerged on the scene. The group took responsibility for a grenade attack at Hari Singh High Street in Srinagar, in which eight civilians were injured. In a statement on the chat platform Telegram, the group said the “attack was the beginning of indigenous resistance in Kashmir to flush out the occupational Indian regime”.

The TRF made headlines in May last year after five men of the Army (Paras) Special Forces unit were killed in an intense encounter at Dongri Behak near the Line of Control (LoC) at Keran in Kupwara. The group was involved in more attacks on security forces in Sopore, Baramulla and Kupwara, in which 11 security forces personnel were killed. The TRF is the first militant group after Jammu and Kashmir Liberation Front (JKLF) that has adopted a non-Islamic name.

In December last year, the group shot dead jeweller Satpal Nischal at his shop at Sariaballa in Srinagar, just weeks after he was certified as a domicile of Jammu and Kashmir. The TRF said Nischal was an “RSS agent” and part of the “settler-colonial project”. The Nischals had migrated from Pakistani Punjab to Indian Punjab in 1947 and started a jewellery shop in Srinagar in the 1980s. In February, Aakash Mehra, whose family owns a popular eatery in Srinagar, was also shot dead by the TRF. Originally from Jammu, the Mehras had been living in Srinagar for decades. In June, Rakesh Pandita, a BJP councillor in south Kashmir’s Pulwama, was shot dead by militants. On October 5 evening, a second Kashmiri Pandit, M.L. Bindroo, who owned a leading pharmacy in Srinagar, was shot dead at his shop at Haft Chinar near Iqbal Park by the TRF militants.

M.L. Bindroo was the second Kashmiri Pandit targeted this year. An hour after his killing, Virender Paswan, a gol gappa seller from Bihar, was shot dead at Lal Bazar 8km away, and Muhammad Shafi Lone, president of a drivers’ union, was killed at Naidkhai in Bandipure in north Kashmir. The TRF claimed responsibility for Bindroo’s killing. The group accused him of being an “RSS ideologue who was involved in immoral trafficking and drug supply”. Lone was accused of being an ‘informer' by the TRF. Paswan’s killing was owned by Islamic State Wilayah Hind (ISWH), believed to be an offshoot of Islamic State (IS).

A day after the aforementioned killings, the TRF shot dead Supinder Kour, principal of Government Higher Secondary School at Sangam in Srinagar’s Eidgah area, and her colleague, Deepak Chand. Kour, a Sikh, was a resident of Srinagar’s Aloochi Bagh area, while Chand, a Hindu, hailed from Jammu. He had been appointed in the education department in Kashmir under the prime minister’s employment package for migrants four years ago. The TRF statement said Kour and Chand had “harassed and warned the parents with dire consequences”, if the students didn’t attend August 15 functions at school.

The attacks spread panic among the minority Pandit and Sikh communities and non-natives in Kashmir, forcing the Centre to rush top intelligence and security experts there to deal with the situation. The security forces responded to the targeted attacks by intensifying anti-militancy operations and killed 13 militants including three TRF members in a week. More than 400 people were also detained. But that didn’t stop the targeted attacks. On October 16, a carpenter, Sageer Ahmed from Uttar Pradesh, and Arvind Kumar, a gol gappa seller from Bihar, were shot dead in Pulwama and Srinagar, respectively. More attacks on non-natives followed the next day: Two labourers were shot dead in Kulgam while another was injured. About 3-4 lakh non-natives work in Kashmir from March to November. Most return to their homes in winters. After a spate of attacks on non-natives, Kashmir Police shifted hundreds of them to safer places. However, scores fled Kashmir due to fear. The targeted killings of civilians have been condemned by political leaders, separatists and the Kashmir Grand Mufti, Mufti Nasir. The targeted killings by militants have jolted the authorities and punctured the BJP’s claim of having restored peace in Kashmir.

The dominant feeling among political and security circles in Kashmir is that the targeted killings are a consequence of the growing insecurity about the demographic change in Kashmir after the removal of Article 370. After revoking Article 370, the BJP government introduced a new domicile law in Kashmir. According to the law, any person who has been residing in Jammu and Kashmir for 15 years—or ten years in case of employees of the Central government, PSUs and banks—is eligible to acquire a domicile certificate of Jammu and Kashmir. The government has not revealed how many outsiders have been issued domicile certificates. According to the 2011 Census, migrants constituted 28.09 lakh of Jammu and Kashmir’s population of 1.23 crore (including 2.90 lakh people from Ladakh). Nearly 50 per cent, or 14 lakh, migrants had already been living in Jammu and Kashmir for 10 years or more. Another 3.35 lakh had been there for between five and nine years.

Ten years have passed since the 2011 Census, and it's safe to assume that over 17 lakh migrants, 14 per cent of the UT population, were already eligible for domicile status. By the next census, the population of those who have lived in Jammu and Kashmir for more than 15 years is likely to balloon as more migrants are expected to complete the mandatory period for domicile status. The new domiciles, who were not permanent residents of Jammu and Kashmir, will significantly impact the political landscape of the UT to the detriment of the majority community in Jammu and Kashmir.

Security officials see the attacks as the first blowback to the BJP-led government’s Article 370 move. They also see a direct link between the Taliban takeover of Afghanistan and the spurt in militant attacks in Kashmir, Rajouri and Poonch, where nine Army soldiers, including two Junior Commissioned Officers (JCOs), were killed in a militant attack on October 12. A very-high-ranking security official told THE WEEK that the threat from Pakistani militants who fought alongside the Taliban focusing on Kashmir is real.

“These militants are battle hardened and highly trained,” he said. “They are also trained in the use of heavier weapons.” The Army has stepped up vigil and deployed more troops on the Line of Control but the threat of infiltration has grown, feel security experts in Kashmir. Already, there have been six infiltration attempts in Rajouri and Poonch districts in Jammu since August, while few groups of militants have also managed to sneak into Kashmir in July. The other reasons that have acted as the tipping point are the growing sense of intimidation; political, administrative and economic disempowerment; sacking of government employees without the right to appeal and evicting people from properties acquired from Kashmiri Pandits sold under ‘distress’ in the 1990s.

The government recently launched a website for Kashmiri Pandits to register complaints about their properties in Kashmir and asked the deputy commissioners to settle the complaints within two weeks. The move to restore properties to migrant Kashmir Pandits, who sold them during the heydays of militancy, has caused a lot of anger in Kashmir. The development is seen in Kashmir as highly intimidating and communal. According to sources, the majority of the complaints acted upon by the authorities lacked merit. However, some properties, like unattended orchards, were retrieved. An official said after the Jammu and Kashmir government in 1997 enacted the Migrant Immovable Property (Preservation and Restraint on Distress Sales) Act, the sale of migrant properties in Kashmir became very cumbersome. “Before that, deals to buy such property were done in Jammu,” he said. “There was no question of coercing a Pandit in Jammu to sell the property he owned in Kashmir,” the official added.

The fear of outsiders taking jobs and business is not restricted to Kashmir alone. In Jammu, where Hindus constitute the majority of population at 62 per cent, people are equally resentful of the emerging scenario. In September, a Jammu bandh was called by the Jammu Chamber of Commerce and Industries (JCCI) to protest against the government's decision to open 100 Reliance Retail stores in Jammu and other “anti-trade decisions” of the BJP-led government. It was the first-ever bandh by the traders since the abrogation of Article 370.

The Jammu traders were also annoyed with the UT administration's mining policies, licences for liquor trade, toll taxes and opening of government jobs in the UT to outsiders. The bandh was backed by all political parties, save the BJP.