“I will consider,” says Rahul on becoming the party chief 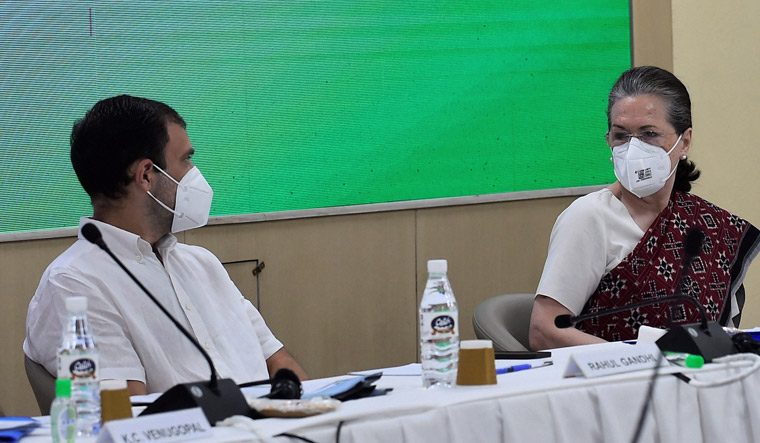 Election of the new Congress president will be held between August 21 and September 20 next year, the party announced on Saturday after its crucial working committee meeting in New Delhi. The CWC met for more than five hours and deliberated upon the issues of organisational elections, upcoming assembly polls and issues faced by common man.

Congress general secretary (oganisation) K.C. Venugopal said the party is going for a massive training programme from top to bottom. "Workers and leaders at all levels will be trained in party ideologies, policies, expectations of Congress workers, grassroots messaging, election management, failure of the present government and countering propaganda," he said.

Venugopal said a massive membership drive for the polls will start from November 1, 2021 and will go on till March 31, 2022.

The CWC also passed three resolutions, one on the political situation, and two others on inflation and a "diabolical attack" on India's farmers, Venugopal said.

Meanwhile, the CWC members unanimously appealed to Rahul Gandhi to take over as the president of the party. A proposal in this regard was mooted by Rajasthan Chief Minister Ashok Gehlot and vetted by other chief ministers and leaders.

Rahul said in response that he will consider it. This is a departure from the past when he either rejected the proposal and referred to the points he had raised in his resignation letter of 2010 or did not give any response.

"Everybody agreed unanimously... whether he (Rahul Gandhi) will become or not is up to him. Everybody is of the opinion that Rahul Gandhi should become the party President," senior leader Ambika Soni told news agency ANI.

According to reports, some leaders even suggested that Rahul be made the working president till the polls.

Rahul resigned as the Congress president in 2019 following the party's debacle in the Lok Sabha elections.

Earlier in her address at the CWC meet, Sonia Gandhi asserted that she is the full-time and hands-on president of the party, in a clear message to the G23 leaders, some of whom had raised issues regarding lack of leadership and absence of an elected party chief.

Sonia said the revival of the party can only happen with "unity, self-control, discipline and by keeping the party's interests paramount".

In a mild reprimand to those G23 leaders who have been airing their criticism of the party in the media, the Congress chief said she has always appreciated frankness and "there is no need to speak to me through the media".