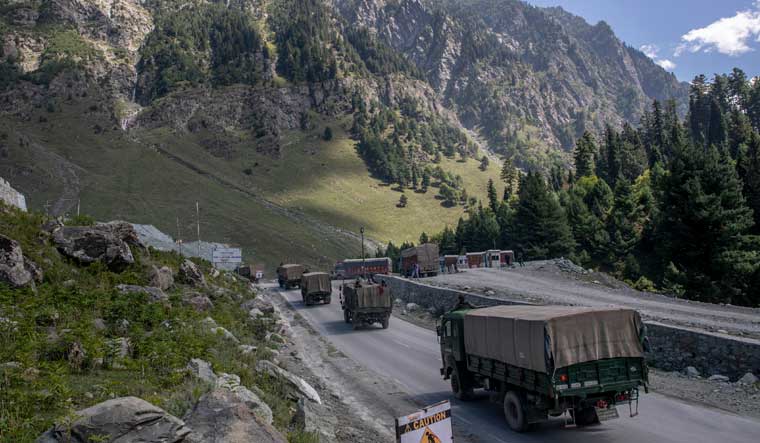 The adamant Chinese military has refused to accept the Indian Army's suggestions to bring peace on the border.

During the 13th meeting of corps commanders of the two armies on Sunday to end the Ladakh standoff, the Indian side made constructive suggestions for resolving the dispute in the remaining areas, but the Chinese side was 'not agreeable' and also could not provide any 'forward-looking' proposals.

"The meeting thus did not result in resolution of the remaining areas," the Indian Army said in a statement.

Both military commanders held discussions for about nine hours on Sunday at Chushul-Moldo border meeting point.

Efforts have been on to resolve the friction points including Hot Springs and the remaining issues along the LAC in eastern Ladakh.

The Indian Army pointed out that the situation along the LAC had been caused by unilateral attempts of the Chinese side to alter the status quo, violating the bilateral agreements.

"It was therefore necessary that the Chinese side take appropriate steps in the remaining areas so as to restore peace and tranquillity along the LAC in the Western Sector," the Indian Army said while adding that this would also be in accordance with the guidance provided by the foreign ministers of the two countries in their recent meeting in Dushanbe where they had agreed that the two sides should resolve the remaining issues at the earliest.

He further said that the Chinese have not achieved anything. “Wonder why would they do this when the world was reeling with the pandemic,” the Army chief had said.

A senior Indian Army official said that during the meeting, the Indian side emphasised resolution of the dispute in the remaining areas would facilitate progress in bilateral relations.

However, the two sides have agreed to maintain communications and also maintain stability on the ground.

"It is our expectation that the Chinese side will take into account the overall perspective of bilateral relations and will work towards early resolution of the remaining issues while fully abiding by bilateral agreements and protocols," the Indian Army further said, appealing to the Chinese military.

Incidentally, last week, the Chinese military made an incursion attempt in Arunachal Pradesh, which was resolved after negotiations at the level of local commanders.

On the other side, Chinese spokesperson Senior Colonel Long Shaohua of the Western Theatre Command of PLA said the Indian side still persisted in its unreasonable and unrealistic demands, which added difficulties to the negotiations.

He further pointed out that China is firm in its resolve to safeguard national sovereignty. He hoped that the Indian side should avoid misjudging the situation and cherish the hard-won situation in the China-India border areas. The Indian side should abide by the relevant agreements and consensus reached between the two countries and two militaries, show sincerity and take concrete actions to jointly safeguard peace and stability in the border areas with China, the spokesperson added.