20 years of Modi in power: 'Replacement' CM who became larger than life in Gujarat

Before his arrival in Gujarat, the BJP had been losing local elections 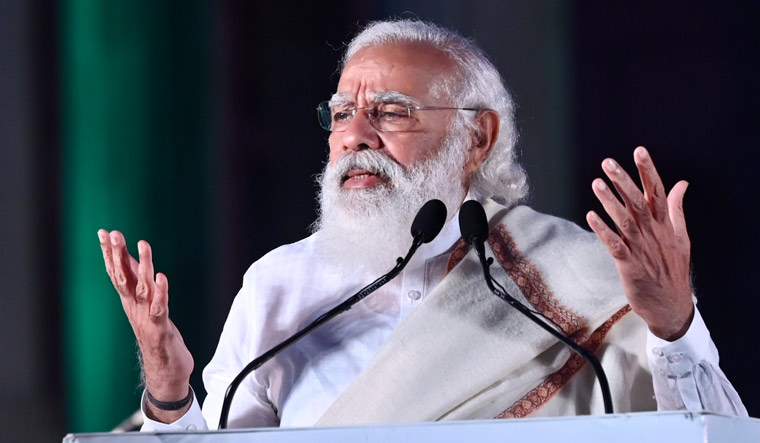 Like the Congress, the BJP – “a party with a difference” — also has a high command and on October 7, 2001, Narendra Damodardas Modi was, arguably, imposed upon Gujarat as the chief minister.

On the face of it, the then chief minister Keshubhai Patel had “mishandled” post-earthquake rehabilitation and the BJP had lost a couple of seats in by-elections. But the real reason was that Modi, who had never contested a single election, wanted to come back to Gujarat.

The grapevine has it that Modi even cried and pleaded before his one-time mentor L.K. Advani to send him back to Gujarat. But once he was in Gujarat, there has been no looking back for him, both politically and personally.

Before his arrival in Gujarat, the BJP had been losing local elections. He changed it all. The party was plagued by infighting. All that stopped with Modi’s presence and what he said was the final word—then and even now also.

As years passed by, Modi became a larger than life person. For many, BJP meant Modi and there is still a large chunk that feels that minus Modi, the BJP is nothing

In the past, Gujarat had a couple of chief ministers, who made a mark for themselves. Chimanbhai Patel and Madhavsinh Solanki are just cases in point. Modi, however, took things at a different level altogether.

He emerged as a strong “manly” person. Gujaratis look up to him as a “Mard” chief minister and he further infused the sense of pride for the state and being a proud Gujarati among the people of this western Indian state.

As the prime minister, he has crazy followers and critics. The scene was no different in Gujarat. If a section of majority of the Hindus felt that minorities were given a befitting reply in post-Godhra riots of Gujarat in 2002, Modi received criticism, internationally, for the violence, spread over days, that left over 1,000 persons from minority community killed. He was also interrogated by one of the investigating agencies for his alleged role in the 2002 riots. Modi did not let the cases affect the way he handled the government and its functioning.

Fond of mega projects, it was during his tenure as chief minister that the Sabarmati River Front Project and the Statue of Unity at Kevadia were either initiated or completed.

Gujarat had always remained at the forefront of development. However, Modi marketed the state to a different level, internationally, in the biannual Vibrant Gujarat Summits, a model which is now being replicated by several Indian states.

For a traditional BJP voter, Modi is someone who can never go wrong.

Albeit, once he exited from Gujarat to become the prime minister, the state has seen three chief ministers and an agitation by the Patidars. Nonetheless, he failed to develop a second rung of leadership that could take over from him.

There is nothing like his legacy in Gujarat, pointed out Darshan Desai, founder of Development News Network. There have been three chief ministers since he left Gujarat and not a single big project in his name, he added. He said that during Modi’s tenure as the chief minister, competent leaders were marginalised.

Regarding the Statue of Unity, Desai pointed out that when you have public funds at your disposal, you can come up with any project.

Pointed political analyst Vidyut Joshi, “Modi is a charismatic leader like Jawaharlal Nehru and Indira Gandhi. He not only draws people towards him but also draws experts, who would like to see India big.”

“Modi likes big projects and he approves them,” Joshi said, pointing to projects like the Sabarmati River Front and the Statue of Unity.