Modi should permit Mamata to travel to Rome: Subramanian Swamy

Mamata alleged the “jealous BJP" did not allow her visit 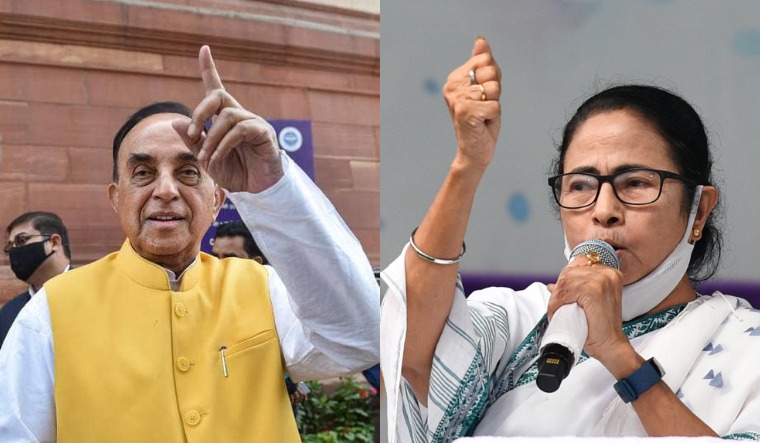 On Saturday, a controversy emerged that is likely to only further inflame the bitter rivalry between the BJP and the Trinamool Congress in West Bengal.

On Saturday, West Bengal Chief Minister Mamata Banerjee told an election rally in Bhabanipur that she had been invited to Rome in the first week of October to attend a global peace meeting, but she had been denied permission to attend by the Centre. Mamata is contesting the Assembly bypoll from Bhabanipur, voting for which will be held on September 30.

Mamata claimed the Pope, other religious heads and dignitaries from various countries, including the German chancellor, are slated to attend the meeting, where she would have been the only Indian and “only Hindu lady”.

An official of the West Bengal Secretariat claimed that the ministry of external affairs had informed that the event in Rome is "not commensurate for (attendance at) the level of chief minister".

Smelling a political motive over the denial, Mamata alleged the “jealous BJP did not allow that (her visit), which only lowered the esteem for India in the outside world".

BJP state spokesman Shamik Bhattacharya responded, saying, "The TMC is unnecessarily doing politics. The MEA must have taken the decision based on well-established norms and protocols. There is no politics in it."

However on Sunday, Mamata found support from an unlikely corner: BJP MP Subramanian Swamy. Swamy sought to know why Mamata was prevented from going to Rome. He tweeted, "Why was Bengal CM Mamata prevented by Home Ministry from attending an international conference in Rome ? Which law prevented her going?"

He also demanded Prime Minister Narendra Modi intervene in the matter. Swamy tweeted, "In the Constitution,freedom to travel is a fundamental right subject to reasonable restrictions. What was the reasonable restriction told to her? Braying like a donkey as ABs & GBs are doing is making Modi’s government look arbitrary and stupid. Modi should intervene &permit her.”

Continuing to tweet on the issue, Swamy argued that Supreme Court rulings that dealt with the freedom to travel gave scope of restrictions on it. He emphasised, "scope does not include reason of 'not fit for CM'".