Modi at UNGA: Terror also threatens countries trying to use it as political tool

Must protect oceans from race for expansion and exclusion: Modi 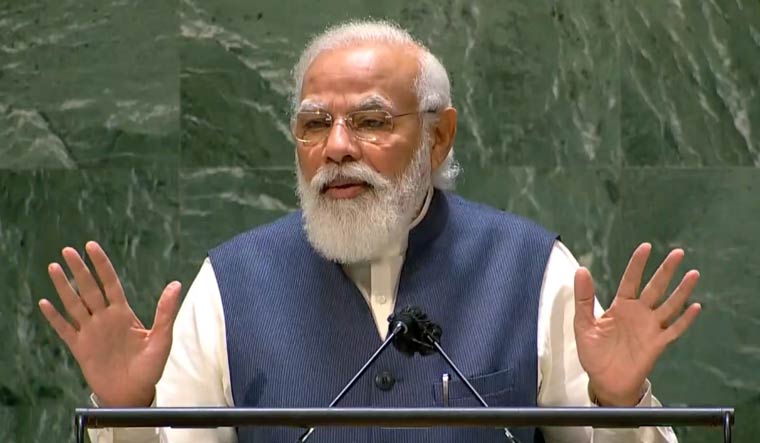 Prime Minister Narendra Modi on Saturday addressed the United Nations General Assembly in New York. This was his first in-person address to the UNGA since 2019, with 2020’s session held virtually.

Modi used his address to hail his government’s achievements, including arranging affordable housing for the poor, deploying vaccinations at scale, and operating the United Payments Interface system.

He also made veiled references to Pakistan and China on matters of state-sponsored terror and ensuring a rule-based order in the oceans.

“Today, the world is facing an increased threat of regressive thinking and extremism. In such a situation, the entire world must make science-based, rational and progressive thinking the basis for development. In order to strengthen a science-based approach, India is promoting experience-based learning. In India, in schools, thousands of adult tinkering labs have been set up. We have also set up incubators and a strong start-up ecosystem has been developed.”

“On the occasion of India’s 75th year of independence, India is going to launch 75 satellites into space that are being made by Indian students in schools and colleges. On the other hand, countries with regressive thinking that are using terrorism as a political tool, these countries must understand that terrorism is an equally big threat for them also. It is absolutely essential to ensure that Afghanistan’s territory is not used to spread terrorism and for terrorist attacks,” he said.

“We also need to be alert and ensure that no country tries to take advantage of the delicate situation there and use it as a tool for its own selfish interests. At this time, the people of Afghanistan, the women and children, the minorities need help, and we must fulfil our duty by providing them with his help.”

“Our oceans are also our shared heritage and that is why we must keep in mind that we must only use ocean resources and not abuse them. Further, our oceans are also the lifeline of international trade. We must protect them from the race for expansion and exclusion. The international community must speak in one voice to strengthen the rule-based world order.”

“The broad consensus reached in the Security Council during India’s presidency shows to the world the way forward for maritime security.”

Modi then quoted Chanakya, “When the right action is not taken at the right time, it is time itself that causes the action to fail.”

Modi called for inclusive development and for the poor to have property rights. He touted the indigenously-developed Zydus Cadila vaccine, noting that it was the world’s first DNA vaccine against COVID-19.

He also called for the further diversification of the global economy and called for expansion of global value chains. “Our Atmanirbhar Bharat or self-reliant India movement is inspired by this very spirit. India is becoming a democratic and reliable partner for global industrial diversification.”

Modi said India has developed the world's first DNA vaccine against COVID-19, which can be administered to all people above the age of 12 years.

"India, which lives on Sewa Paramo Dharma (service is the main duty), is engaged in vaccination development and manufacturing despite limited resources. I want to inform UNGA that India has developed the world's first DNA vaccine, which can be administered to all people above the age of 12 years," Modi said, addressing the 76th United Nations General Assembly session here.

Last month, the Drugs Controller General of India gave Emergency Use Authorisation (EUA) to Zydus Cadila's indigenously developed needle-free COVID-19 vaccine, ZyCoV-D, which is to be administered to beneficiaries in the age group of 12-18 years in the country.

"Another mRNA vaccine is in its late stages of development. Scientists in India are also engaged in the development of a nasal vaccine for Corona. Realising its responsibility towards humanity, India has once again started giving vaccines to the needy of the world. I also invite vaccine manufacturers from all over the world today to- Come, Make Vaccine in India," the prime minister said.

'We are answerable to future generations'

With the UN General Assembly session taking place a day after global protests against climate change, Modi made reference to calls by the youth for climate action.

“I’m sure that you all also feel proud of India’s efforts with regard to climate change compared to those made by big and developed nations. We are working on making India the world’s largest green hydrogen hub. We are answerable to our future generations when they ask: Those whose responsibility it was to give direction to the world, when it was time to take decisions, what were they doing?"

He also called for UN reform, referencing the recent controversy over the Doing Business rankings.

“If the United Nations wants to remain relevant, it will need to improve its effectiveness and enhance its reliability. Today, all kinds of questions are being raised about the UN. We have seen such questions being raised related to the climate crisis and we also saw them during COVID. The proxy war going on in many parts of the world, terrorism and the recent Afghan crisis, have further highlighted the seriousness of these questions. With regard to the origin of COVID, or regarding the Ease of Doing Business rankings, institutions of global governance have damaged the credibility they built which was the result of decades of hard work.”

“It is essential that we constantly strengthen the UN in order to safeguard global order, global laws, and global values. I would like to quote the Nobel Laureate, Gurudev Rabindranath Tagore: Boldly proceed on your path of good deeds. May you overcome all weaknesses and doubts,” the PM said, ending his address.