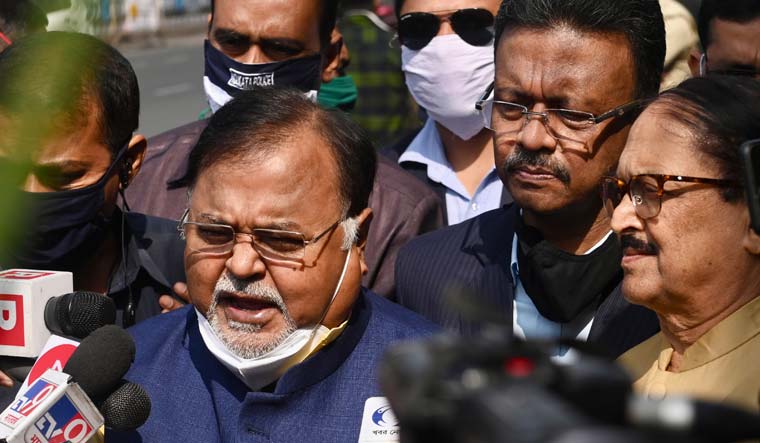 A CBI investigating team from Delhi on Monday reached Kolkata and questioned West Bengal Industry Minister Partha Chatterjee in connection with a multi-crore Ponzi scam. Chatterjee is a senior Trinamool Congress leader and currently the secretary general of the party.

Chatterjee was called last month by the CBI to appear before its office in Kolkata’s CGO Complex. But Chatterjee wrote back that due to the upcoming byelection in Bhabanipur, he would not be available for questioning on Monday. He also said that if the CBI needed to talk to him, the agency should better come to his residence considering the COVID situation.

But the five-member CBI team, which came from Delhi, went straight to Chatterjee’s office in Camac Street in Kolkata on Monday. He was being questioned at the time of writing this report.

Chatterjee is being questioned by the CBI in connection with the I-Core chit fund group, which collapsed in 2014. The group allegedly funded Chatterjee’s Durga Puja celebration in Kolkata many times. The amount that was paid, reportedly, runs into several crores of rupees, said a CBI source.

However, a prominent citizen, who was arrested in the scam, took his name and spoke about Chatterjee’s alleged proximity to the I-Core group, which used to run shopping malls and funded several Bengali newspapers and even television channels. The CBI is investigating the larger conspiracy in the Ponzi scam in West Bengal, which is estimated to be around Rs 1 lakh crore. The major companies that siphoned off public funds are Saradha group and Rose Valley group, for which investigations are still in progress.

Meanwhile, Chatterjee’s interrogation at a time when he was made a key campaigner in the Bhabanipur constituency will create controversy. TMC leaders are opposing the CBI’s “high handedness” and speaker of the West Bengal Assembly Biman Bandyopadhyay has already written to the CBI, asking why he was not kept in the loop before the agency questioned public representatives and ministers of the state.

Earlier, Chief Justice of Calcutta High Court, Justice R.S. Bindal has summoned the acting director general of West Bengal Police, Manoj Malviya, on why the former DGP could not present all the directors of the chit funds to the court as asked by him. Malviya wanted relief from the court, but Justice Bindal refused that.