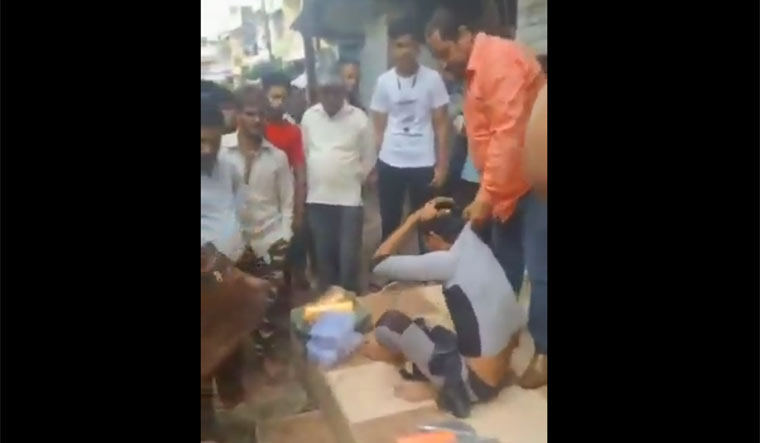 Three persons accused of beating up a bangle seller as seen in a viral video from Indore, have been arrested on Monday. A case under 14 sections of the Indian Penal Code including that of promoting enmity between different groups, unlawful gathering, rioting and dacoity have been imposed on them.

The video showing some people beating up the bangle seller, hurling abuses at him, taking out things from his pocket and instigating others in the crowd to beat up the man, had gone viral on Sunday night, causing furore.

Meanwhile, a separate FIR has also been registered against around 28 persons for causing ruckus outside the Central Kotwali police station in Indore late on Sunday night demanding action against those accused of beating up the bangle seller.

An FIR has been registered against the bangle seller, Tasleem Ali, too, under serious IPC sections 354, 467, 468 and POSCO Act for forgery, outraging modesty of women and molesting a minor girl, at Banganga police station.

While the FIR registered in the assault case has quoted Ali as saying that he was beaten up after his name was asked, Home Minister Narottam Mishra said on Monday that the bangle seller was roughed up following a dispute over him using a Hindu name although he belonged to a different community. Mishra also said that the man carried two Aadhar cards. The minister said that bangles are sold to women traditionally during the Hindu month of Sawan and this point was also a cause of dispute.

Indore inspector general of police (IG) Harinarayanchari Mishra confirmed to THE WEEK that three main accused in the beating up case had been arrested and a separate FIR has been registered against those who created ruckus outside the police station on Sunday night and necessary action would be taken against them.

Earlier in the day, superintendent of police (East), Indore, Ashutosh Bagri, had identified the three main accused in the beating up case as Rakesh Pawar, Rajkumar Bhatnagar and Vivek Vyas.

As for the documents of Tasleem Ali, the IG said that three documents—one voters’ ID card and two Aadhar cards—carried discrepancies related to the name of Ali’s father and this was being probed. “Suitable action will be taken in this matter, too, if necessary,” Mishra said.

Congress MLA Arif Masood who along with All India Congress Minority Department chief Imran Pratapgarhi had taken initiative late on Sunday night to get a case registered against those accused of beating up the bangle seller, has said that one of the documents of Tasleem Ali was from when he was a minor.

Meanwhile, Indore collector Manish Singh said on Monday that there are intelligence inputs that members of organizations like Social Democratic Party of India (SDPI) and Popular Front of India (PFI) were involved in recent incidents of communal disturbances in the city including the protest outside Central Kotwali police station on Sunday night.

“We are keeping close watch on them and they are under surveillance. Some of them have been identified and named in the FIR. We will take action against them and extern the elements from the district if needed. It has come to notice that office bearers of these organizations are instigating youth. Such things will not be tolerated. Also, if necessary, the National Security Act (NSA) will be invoked against them,” Singh said during a press conference.

Mumtaz Khan and Rauf of SDPI made a statement saying that they had no role in instigating the said protest and it was a voluntary effort of the local people against injustice. They said that their organization was against communalism and injustice and kept fighting on these fronts.