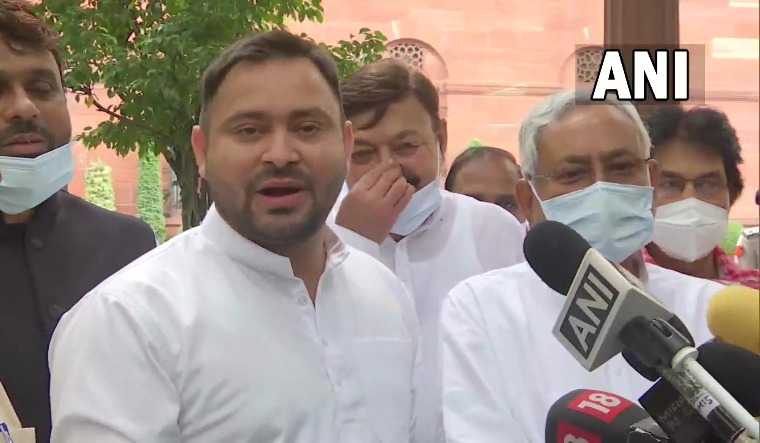 A delegation comprising leaders from 10 parties in Bihar met Prime Minister Narendra Modi on Monday. Led by Bihar Chief Minister Nitish Kumar, the delegation had met the prime minister to demand a caste census be held.

RJD leader and leader of opposition in Bihar Tejashwi Yadav was among the members of the delegation. Tejashwi was quoted by ANI as saying, "Our delegation met the PM today not only for caste census in the state (Bihar) but in the entire country. We are awaiting a decision on this now." Tejashwi declared, “If animals, trees can be counted, so can people; caste census will be historic pro-poor measure.”

Nitish Kumar declared, "People in Bihar and the entire country are of the same opinion on this issue. We are grateful to the PM for listening to us. Now, he has to take a decision on it."

Before the meeting, leaders of other parties had also called for a caste census. Ajay Kumar of the CPI(M) was quoted by ANI as saying, "We told the CM (Nitish Kumar) that we should meet PM because it (caste-based census) is needed; caste-based exploitation takes place even today. Caste-based census will be like a mirror to help rectify this."

The demand for a caste census was triggered by a statement by the Centre in Parliament last month that populations of only SCs and STs were proposed to be enumerated.

In states like Bihar, where OBCs have dominated politics since the Mandal era, this has led to a vociferous demand for a headcount of backward classes as well.

Nitish Kumar had said last week, “there is a countrywide sentiment in favour of a caste census being conducted at least once. There should be no misgivings as such an exercise will be beneficial for all social groups”.

The chief minister had sought an appointment with the PM after a request to the effect was made by leaders of the Grand Alliance, who pointed out that the state legislature had twice passed unanimous resolutions in favour of a caste census.

Notably, on both occasions, all MLAs of the BJP had also voted in favour. However, the state unit of the party appeared to be in a quandary of late, with the top leadership having adopted a different stance.